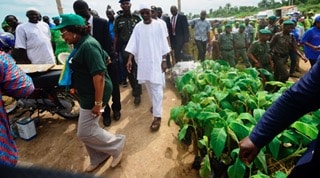 The Governor of Osun State, Ogbeni Rauf Aregbesola, on Thursday launched a research and training farm institute at Ago Owu area in Ayedaade Local Government Area of the state as part of his administration’s commitment to transform agriculture sector in the state.

The Research Institute, according to Governor Aregbesola, was achieved in collaboration with the International Institute of Tropical Agriculture.

Aregbesola disclosed that the state had released 205.5 hectares of land for the take-off of the programme as part of efforts to advance agriculture in the state.

While launching the institute at Ago-Owu Farm Settlement, Aregbesola attributed the success of the scheme to the unflinching support which the state received from the officials of the IITA to boost agricultural productions.

Aregbesola, who described the institute as a “citadel of knowledge in agriculture”, said with establishment, all challenges confronting farming and farmers would be put behind.

He said the institution has the capacity to train, retrain and conduct various researches that would not only increase farmers’ yields but also expose them to modern agriculture practices.

Governor Aregbesola said the idea was nurtured in a bid to support the existing farmers and encourage young ones into farming, adding that with the scheme, a new era has begun in the agriculture sector in the state.

Aregbesola said the scheme was part of his administration’s six-point integral action plan to increase on the agricultural produce, improve the welfare of farmers and turn Osun State to food basket of the southwest Nigeria.

According to him, the idea behind the establishment of the institute is to advance research in the agriculture sector in line with the state’s commitment to agribusiness and commercialisation.

He said: “We must thank the IITA for the partnership we have because with the establishment of this training institute, our partnership is not just a memorandum on paper but rather a memorandum actualised.

“IITA has been an open partner with Osun government and the partnership was formalised in 2015 after a Memorandum of Understanding was mutually signed to support agriculture sector in the state.

“This MoU has been actualised with the research and training institute set up to advance research in agriculture, encourage participation in farming and as well improve on the agricultural productivity in the state.

“This initiative aimed at improving on the agricultural agenda of the state, getting youths attracted to farming, exposing farmers to modern and mechanised farming techniques and as well increase agricultural productivity.”

On why the state decided to partner IITA, Aregbesola said the decision was taken having realised the agricultural poor yielding culture in the state.

According to him, Osun State is the highest producer of cassava in Nigeria but even as that, the state produces just 16 metric tons per hectare which is far from expectation.

He added: “We partner this international institute to deepen our commitment to massive food production in the state and ensure that the farmers’ yields are improved geometrically.

“For instance, Osun is known to be the highest producer of cassava, but with this feat, our production is poor while the yield per hectare is between 15/16 metric ton per hectare.

“This is widely far from reality while compare with what those who have advanced on the production of cassava have per hectare, and it is for this reason that reached a compromise with IITA to support our farmers for greater productivity.

“It is our belief that with this partnership, Osun farmers most especially the existing ones would begin to experience a new life in the agriculture sector while youth would also be encouraged to farming.

“With this partnership, no farmer would suffer anything as far as farming is concerned because this initiative would go a long way to support all there needs and bring a difference into the system.”

He described the state’s commitment to agriculture revolution as remarkable, a step he said would be advanced by the IITA to ensure the actualisation of the state dreams in the agriculture sector.

Abberton, who spoke on behalf of IITA, said the partnership was important as it reflects the role the farm will play not only in terms of research addressing the needs of smallholder farmers, but also in terms of training and capacity building.

He said the MoU signed between the state of Osun and IITA in 2015 was the consolidation of long tradition of formal partnerships with various stakeholders around the state, which, according to him, represents IITAs commitment to build on this tradition and to further enhance the transfer and adoption of IITA research to the benefit of the farmers in the state.

He said: “I welcome you all and thank those involved in organising this event and in the setting up and developments of this IITA Research and Training Farm.

“This is important as it reflects the role that this farm will play not only in terms of research addressing the needs of smallholder farmers but also in terms of training and capacity building.
“In particular the IITA Youth Agripreneurs will be making good use of this farm in the development of their activities.

“IITA has had a long tradition of training, transferring technology to farmers in the State of Osun, through various projects.

“The MoU signed between the state of Osun and IITA in 2014 was the consolidation of long tradition of formal partnerships with various stakeholders around the state.

“This farm represents IITAs commitment to build on this tradition and to further enhance the transfer and adoption of IITA research to the benefit of the farmers of Osun state.”

In his welcome address, the Director General, Office of Economic Development and Partnerships and Coordinator, Osun State Rural Enterprise and Agriculture Programme, Dr. Charles Akinola, said the initiative was to bring technology closer to the farmers in all aspects of agricultural production.

According to Akinola: “We are doing this to have huge production yields.

“It is hoped that with this, Osun farmers will begin to count gains as agriculture would be commercialised while our state would become training centre for her peers in agriculture sector.

“Youths would also be attracted to farming since this partnership would provide the necessary seeds with early maturity.

“We want to make agriculture a way of life and a real business for all and sundry.”

While presenting the agriculture inputs to the state government, the Project Leader, Cassava Weed Management and Director, Development and Delivery Office, IITA, Dr. Alfred Dixon, assured the state of the organisation’s readiness to ensure that the state have highest tons and yields in all areas of agriculture.

Dixon said: “We are here to work with Osun government to ensure that its agricultural policies are achieved.

“Our objective is to ensure additional values in all areas of agriculture.

“We have come with lots of seeds.

“We have many farm materials and we ensure that youths in the state are encouraged to farm.

“With what we have on ground in terms of agriculture materials coupled with our expectation on yield, Osun can export farm produce to 17 states.”