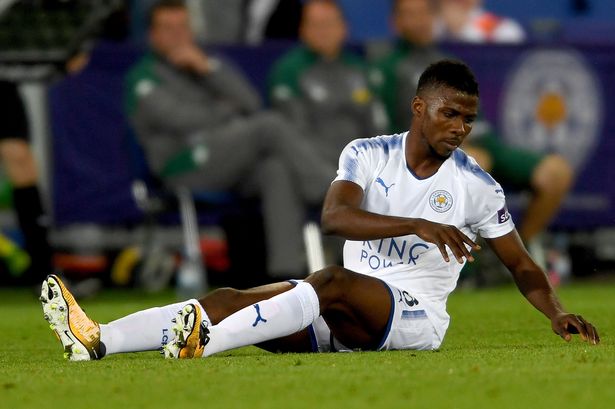 Kelechi Iheanacho will be available for Leicester City’s clash with Norwich after undergoing a concussion protocol.
The striker was substituted at half-time during Saturday’s defeat to Manchester City after a collision with visiting goalkeeper Ederson, who caught Iheanacho on the chin and throat with his fists.
After an assessment, Iheanacho briefly returned to the pitch before being taken off at the interval.
Manager Brendan Rodgers praised his forward’s courage and said he is his “normal self”, but because of the possibility of a concussion, Iheanacho has had to go through a six-day programme, which meant he was withdrawn from contact sessions in training.
“There’s an enhanced care procedure in place but he’ll be available for Friday,” said Rodgers.
“We’ve gone through the protocol from the game, so he’s obviously not in contact but he’s been training and working, he’s done similar to what all the players have done who have been in contact. When the time comes, he’ll have passed through the procedures.
“He felt he could maybe have gone on, but he looked a bit groggy at half-time. I always have to go with the medical team, and the advice was he was better coming off.
“But he’s recovered well. He’s been his normal self but we have to take care, which is the right thing to do.
“After the game, we were showed it again, and it’s not something you want to see again. The run, and the courage he showed, was absolutely incredible. He’s a tough boy.”
Iheanacho has scored eight goals and set up four more in his 15 appearances across all competitions this season.