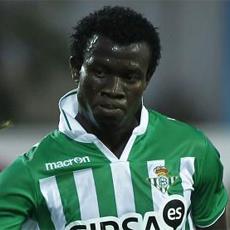 Real Betis of Spain midfielder, Nosa Igiebor, and Villareal striker, Ikechukwu Uche, on Tuesday joined the Super Eagles fold ahead of the international friendly against a Catalonia selected on Wednesday night.
Celtic’s Rabiu Ibrahim was also part of the party that joined the Eagles for the only training session that the team will have on Tuesday evening before the match.
There were fears that Igiebor might not make the team when he failed to arrive Faro, Portugal as arranged with Head Coach, Stephen Keshi.
That fear, however, evaporated when he appeared in camp on Tuesday afternoon, as the team landed in Barcelona.
The team departed its Browns Resort and Sports Centre camp on schedule at 4am, Portuguese time, which is 5am Nigerian time, but experienced some little delay at the Faro Airport.
It eventually arrived Lisbon at some minutes after 9am.
The flight took just 35 minutes.
After immigration formalities, the team set out for Barcelona and arrived the city at about 11:20am Nigeria and Spanish time.
The flight lasted 90 minutes
Officials of the Nigerian Embassy in Spain, led by Head of Chancery, Safiu Olaniyan; Deputy Consul General, Nze Nnadi; Curtis Aghedo, who is the President of the Nigerian Union in Barcelona; Kingsley Lawal, President, Nigerians in Valles; and Gbenga Adegoke, Scribe of Nigerians in Valles, were on hand to receive the team at the magnificent Barcelona International Airport.
There were also about 20 Nigerian football supporters who were at the airport to welcome the team.
The team was immediately moved to the equally eye-popping Hotel Fira Palace in the heart of Barcelona, where they were addressed by Olaniyan on behalf of the Nigerian Ambassador to Spain, Ambassador Bainca Olivia Odimegwu-Ojukwu.
Odumegwu-Ojukwu described the national team as the higher grade of ambassadors of Nigeria and urged the players to go all out and do the country proud in the friendly against Catalonia and at the upcoming Nations Cup in South Africa.
She said she was aware that the government of President Goodluck Jonathan was solidly behind the team to achieve success at the African Cup of Nations tourney as football is a major unifying force in Nigeria.
Keshi said he was humbled by the kind words of the ambassador and assured her that the Super Eagles will do whatever it will require to defend the green white green colours of the nation at all times.
“We promise never to let the confidence and trust of the nation down at all times,” he said.