ICC Qualifiers: Nigeria’s Coach promises his team will be unrelenting 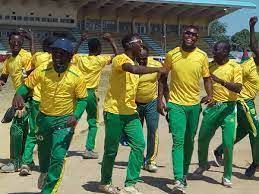 Gim told the News Agency of Nigeria (NAN) Saturday they would continue with the same momentum of their opening match to win all their other games in the competition.

NAN reports that Nigeria’s opening match in the qualifiers at the Moshood Abiola National Stadium Friday saw them beat Rwanda by 10 wickets.

“The target of the team was to win the first game, and I am so happy with the victory. What we needed was a good start to set the tone.

“We started the tournament on a good note and I think we have achieved what we planned for. Kudos to my players for the job well done,” he said.

”But we will have to keep that momentum. We must strive to keep winning. That’s the way to go in order to succeed,” Gim added.

Speaking also, captain of the Nigerian team, Ridwan Abdulkareem, said it was a good match for his team.

“Our opponents fought hard, but we defeated them with experience and tactics.

“We will work hard to win all our other games because we are well prepared for the competition,” he said.

On his part, the captain of Rwanda, Yvan Bimenyimana, noted that the result showed it was a good day for the Nigerian team.

“Both teams played well, but the Nigerian team won the day. We worked hard on the pitch, but unfortunately for us it was not fruitful.

“We will play a better match in our next game, which must result in a win,” he said.

NAN reports that on Saturday at the competition, Kenya will take on Ghana, while Rwanda will face Sierra Leone.

The ICC Under-19 Men’s Cricket World Cup Africa Division 2 Qualifiers began on Friday at the Moshood Abiola National Stadium in Abuja and is expected to end on October 9.