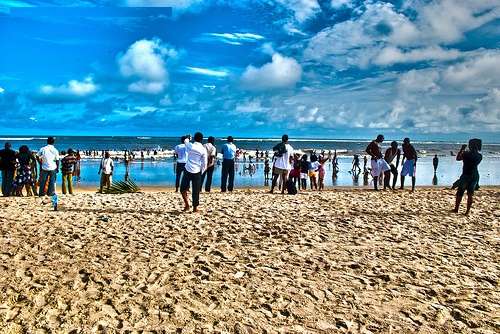 An indigene of Ibeno, Ibeno Local Government of Akwa Ibom, Chief Mkpaeto Uleato, has called for adequate security measures at Ibeno beach where two brothers drowned during a picnic.                                               He told the News Agency of Nigeria on Tuesday in Ibeno that although the state government generated revenue from the tourists that visited the beach, there ought to be measures to guarantee tourists’ safety.
According to him, Ibeno is the longest and attractive beach in West Africa located at Iwuokpom community.
An eyewitness, who claimed anonymity, said that the drowning of the two brothers occurred on April 8 when they were at the beach with family members for picnic.
He said that one of the victims was eating with his family and friends after which he went to swim.
The eyewitness said: “The victim was eating with his wife and children and after that, he went to swim and immediately raised alarm that he was drowning.’’
The witness said that the other victim, out of sympathy, jumped into the ocean to save the drowning brother but was carried away by the scourge of the ocean.
The witness said further that the victims would not have died if the beach had a management and safety guides.
The eyewitness said that bodies came out of Ibeno beach shore-line in the early hours of April 9.
He pleaded that the state government should take over the management of the recreation centre for revenue generation and tourism.
When contacted, the Chairman of Ibeno Local Government Area, Mr Ifum Udoh, said that the authority was working to checkmate loss of lives in the beach.
He also said that the state government had concluded plans to take over the beach.
But the DSP, MacDon Achebe, the Akwa Ibom Police Public Relations Officer, said that the police were not aware of the incident.
He, nonetheless, said that the Nigeria Police Division in Ibeno had yet to give information of such incident to the police command in Uyo.