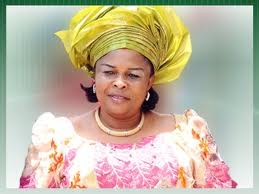 Nigeria’s First Lady, Dame Patience Jonathan, on Sunday held a special thanksgiving service at the Aso Rock Chapel for safe return to the country after about two months in a hospital abroad.
Jonathan was on admission at the Horst Schmidt Klinik in Germany for an undisclosed ailment.
Her media aide, Ayo Oshinlu, however, insisted then that she only traveled abroad to rest.
Jonathan had to hurriedly cancel the thanksgiving in December because of the death of former Governor Patrick Yakowa of Kaduna State and firmer National Security Adviser, General Owoye Azazi, in a helicopter crash in Bayelsa State.
In her remarks at the Aso Rock chapel, the First Lady said she actually went through hell while in hospital.
She said it was only God that brought her back to life.
Dame Jonathan said she was aware that people close to her actually thought she was dead and leaked the information to the Nigerian public, alleging that some even went as far as selling some of her belongings.
While thanking God for bringing her back to the country in sound health, she promised to dedicate her life to assisting the less privilege.
Her words: “It was not an easy experience for me.
“I actually died.
“I passed out for more than a week.
“My intestine and tummy were opened.
“I am not Lazarus but my experience was similar to his.
“My doctors said all hope was lost.
“It was God himself in His infinite mercy that said I will return to Nigeria.
“God woke me up after seven days.
“I know that some people somehow leaked the information that I was dead.
“They are people that I trust and rely on.
“To them, I was dead and I would never return to the country alive.
“Some of them even sold my things off.
“I won’t say everything here.
“It is the Lord’s doing that I returned alive.
“When God says yes, nobody can say no.
“People are always afraid of operation (surgery).
“But in my own case, while my travail lasted, I was begging for it (surgery) after the third operation because I was going to the theatre everyday.
“It was God who saw me through.
“I did eight or nine operations within one month.
“It was not an easy one.
“The day I came back, I said God I have nothing to say, I offer myself to you.
“I will be doing things that will touch the lives of the less privilege.
“God gave me a second chance because I reached there.
“He knew I had not completed the assignments He gave me, that was why I was sent back.”
Present at the special service were President Goodluck Jonathan, ministers and top government functionaries.

Wife of President Goodluck Ebele Jonathan, Dame Patience Jonathan, has confirmed reports that she was seriously sick last year.
Jonathan said she actually died for seven days before coming back to life.
Dame Jonathan said she underwent an operation that led to the opening up of her tummy.
Speaking at a thanksgiving service on her successful return to the country after her illness, Jonthan said on Sunday: “It was not an easy experience for me.
“I actually died.
“I passed out for more than a week.
“My intestine and tummy were opened.
“It was God himself in His infinite mercy that said I will return to Nigeria.
“God woke me up after seven days.”