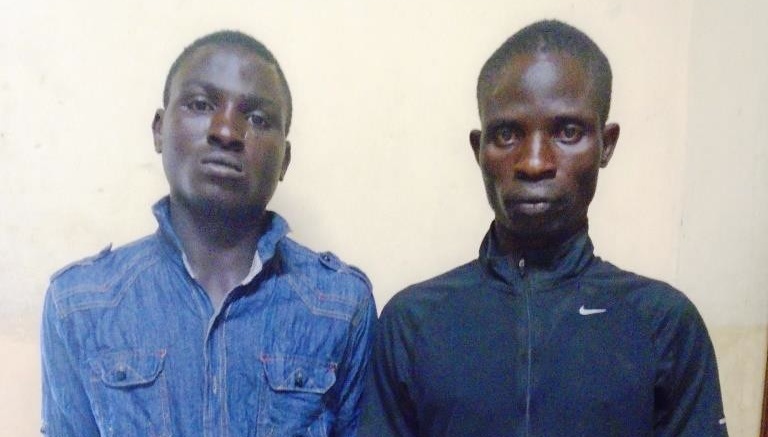 The onslaught against criminal activities in Lagos State by officials of the Rapid Response Squad of the Lagos State Police Command has continued to yield more results as the operatives, over the weekend, arrested two suspected pickpockets operating in Maryland and Mile 12 areas of the metropolis.
The suspects, Taoreed Ashimiyu, 24, and Kayode Jolaade, 34, were caught in the act by policemen after they had successfully removed three phones from commuters in different BRT buses.
Upon their arrival at the RRS headquarters, the duo confessed to the crime, saying that they were experts in robbing commuters in Mile 12 and Maryland.
Taoreed, who hails from Yemetu, Alawada in Oyo State, said he spent the proceeds from stealing on prostitutes.
He said: “I have not spent a dime from my proceeds in stealing on anything tangible.
“I womanise a lot and I spent my monies on both young and old ladies.
“I smoked indian-hemp and drink all sort of hard drinks.”
Taoreed revealed that before his arrest, he had removed two mobile phones from commuters during a rush at the Maryland Bus Stop, adding that his third attempt led to his arrest.
In his confessional statement to the Police, he explained: “My accomplice caused my arrest today.
“Before he joined me at Maryland, I had stolen two phones successfully.
“But when he came around, we had to be moving in pair.
“People who had known him in the area were monitoring us, unknown to us.
“I went for another victim from whom I removed money from his pocket.
“But I never knew the pupils who saw us together have started monitoring me too.
“The pupils after monitoring our operations for some time started chasing me.
“On sighting them, I took to my heels.
“They were many.
“They caught up with me and started beating me.
“I managed to escape from them and ran to join moving Bus Rapid Transport.
“As I was attempting to board, I saw a guy at the entrance who was trying to assist me in getting into the bus.
“But unknown to him, I was being chased by some people.
“In the process of helping me, I dipped my hand in his pocket and removed his phone and jumped down, but he didn’t know I had equally removed his phone.
“As I jumped down, the pupils continued chasing me.
“When I had no option left, I tried to cross the expressway, but unfortunately for me, I was knocked down by a truck.
“There I was, writhing in pain on the highway.
“People thought I was dead.
“My unconsciousness on the highway has caused traffic.
“I opened my eyes to see RRS men, who arrested me.”
On his part, Jolaade said he was lured into the crime after losing his job at a private security guard firm based in Lagos.
He continued: “I was once a security guard working for one of the new generation corporate security companies in the state (name withheld).
“Our appointment was terminated about a year ago.
“I tried all means to get new job but to no avail.
“Then, I chose to be following pickpockets to hide their stolen phones and other items.
“Occasionally, I did steal when the opportunity comes.
“In fact, I seriously regretted my action and for taking into crime.”
One of their victims, Omotoye Ayodeji, noted that he had no knowledge that his phone had been removed until he got to his Bus Stop in Ketu when he was about to alight from the bus.
Ayodeji added: “The thief must be very smart.
“I saw him dangling at the entrance of the bus and I assisted him to get into the bus for him not to fall off from the moving vehicle.
“Surprisingly, I only noticed that he jumped down again.
“But while alighting at Ketu, I couldn’t find my phone anymore.
“Then, I now remembered the guy who jumped down from the bus.
“Possibly, he might have removed my phone.
“I took another bus back to Maryland and luckily for me, I found him in the middle of the road writhing in pain.
“I asked him whereabouts of my phone, he told me he had passed it to his accomplice, whom we later arrested from where he was hiding.”
The State Police Public Relations Officer, Superintendent of Police Dolapo Badmus, who confirmed the arrest of the suspects, said the two suspects have been charged to court for prosecution.