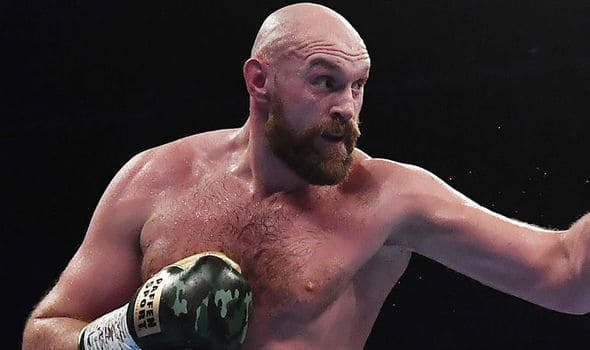 Tyson Fury has revealed all the ways he’s changed his preparation for his second fight with Deontay Wilder, including masturbating seven times a day.
The undefeated heavyweight gets his second chance at winning the WBC title when he faces the Bronze Bomber in a rematch from their controversial draw in December 2018.
But Wilder isn’t the only one Fury is wanting to get his hands on as the Gypsy King revealed that he’s administering some self love seven times a day in the build up to the fight.
Talking to Hoop Jab, he explained all the new things he’s doing to turn the draw into a win: “I’m doing a lot of things I didn’t before.
“I’m eating five/six meals a day.
“I’m drinking eight litres of water a day.
“I don’t know if any of that even matters on the night.
“It didn’t matter before but if it’s gonna give me an edge on winning this fight then I’m willing to try it.
“Why not?
“I’m masturbating seven times a day, keep my testosterone pumping.
“I’ve gotta keep active, testosterone flowing.
“Don’t want the levels to go down.”
Whilst some pleasures are being increased, the 31-year-old also revealed that there is some others he’s had to cut down on, like drinking diet coke.
Fury said: “I’m really eliminating all the distractions this time.
“No phones, nothing like that.
“No diet coke, which I’ve become susceptible to.
“I’ve had tons and tons and tons of it in every training camp.
“This is the first training camp in 10 years I’ve not had one diet coke and I won’t have any until after the fight.
“This is the first training camp where I’m going to bed early at 9:30 every night and I wake up every morning at 7am, fresh as a daisy.”
Talking of “knocking one out,” the Manchester born boxer thinks that the second fight will be different to the first showdown when they face on February 22.
For much of that fight, the lineal champion boxed on the back foot and moved well to avoid Wilder’s punching power, though he did twice get caught with shots that put him on the floor, but didn’t end the fight.
However, Fury claimed on Monday night he’ll end the fight in two rounds, saying: “I’ll meet you in the center of the ring, Deontay Wilder.
“February 22nd, you won’t have to look anywhere for me.
“Just watch out for the right hand because you’re going to sleep in two rounds.
“Two! Two rounds, he’s going down.
“I keep having a dream about two rounds.
“In poker, I keep getting dealt number two.
“It’s definitely a thing.
“He’s getting knocked out in two rounds. 100 percent!”
. Sport bible.com.