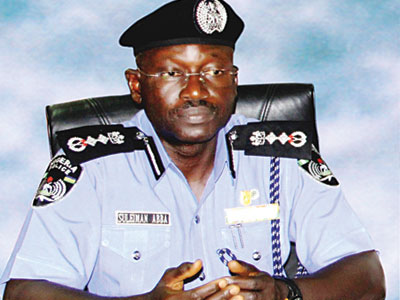 The Inspector-General of Police, Suleiman Abba, has set up a Special Investigative Unit for Electoral Offences ahead of the forthcoming general elections.
This was contained in the Independent National Electoral Commission’s Daily Bulletin in Abuja on Friday.
The bulletin said the unit would be headed by a Commissioner of Police, Nwodibo Ekechukwu, of the Legal Section of the Force Criminal Intelligence and Investigative Department.
It said the commissioner would be assisted by two Coordinators, ACP Tafida Sale, for the North and ACP Imo Orok, for South, six team leaders, 29 members and 26 support staff.
According to the bulletin, this is to stem the tide of electoral violence that might beset the 2015 general elections.
It said the letter setting up the unit, dated February 16, was conveyed to the Chairman of INEC, Prof. Attahiru Jega.
The bulletin said the letter was signed by the Deputy Inspector-General of Police, FCIID, Solomon Arase.
“The I-G said the unit was set up to ensure that electoral offences were not only detected but diligently investigated and prosecuted in collaboration with the commission,” it said.
A further breakdown of the unit indicated that six members of the unit would take charge of the South West, six for the South South and another six for the South East.
Also, six members would take charge of North West, five for the North-East and six for the North Central.