by The Eagle Online
in Business, Economy, Featured
1 min read
0

Ministry of Petroleum, others make presentations as Buhari presides over virtual FEC

The Minister of Finance, Zainab Ahmed, has denied saying that the Federal Government was moving to peg the number of children per mother.
Ahmed said this on her Twitter handle on Wednesday.
She was reacting to news reports which quoted her as having spoke at the 24th Nigeria Economic Group Summit on Tuesday.
She said based on the need to actualise the Federal Government’s Economic Recovery and Growth Plan, curtailing spiralling population had become imperative.
“We have been engaging traditional rulers and other leaders.
“Specifically, we have found out that to be able to address one of the great challenges that we identified in the ERGP, which is the growth in our population, we need to engage these institutions.
“And we hope that with their support, we will get to a point where we can come out with the policy that limits the number of children that a mother can have because that is important for sustaining our growth.”
However, on Wednesday, Ahmed said she only spoke about child spacing.
She said in the tweet accompanied by an image: “The federal government has been engaging critical stakeholders like traditional and religious leaders to advise their members on child spacing.
“We never said we are placing a cap on childbirth.
“What is child spacing?
“This is a healthy practice of waiting between pregnancies.” 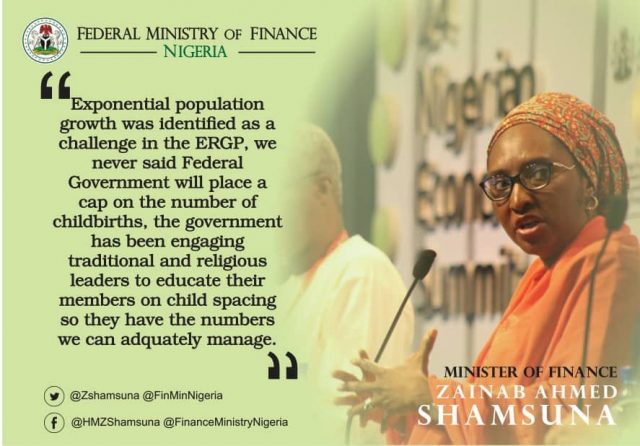 Ministry of Petroleum, others make presentations as Buhari presides over virtual FEC

No going back on removal of petrol, electricity subsidies, borrowing of dividends — FG