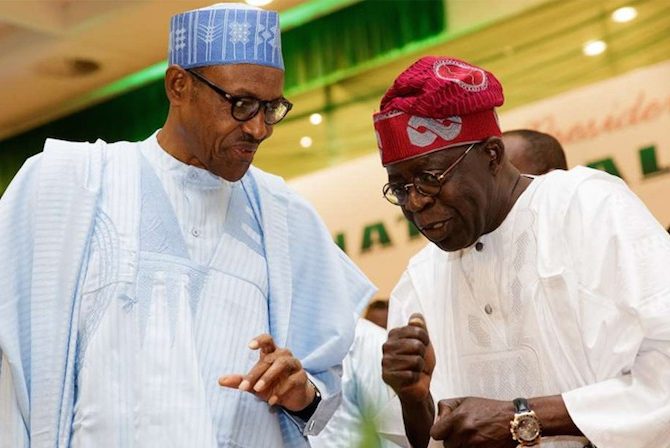 The National Leader of the All Progressives Congress and one of the leading presidential aspirants of the party for the 2023 elections, Asiwaju Bola Ahmed Tinubu, has said that he should naturally get the support of President Muhammadu Buhari for his ambition.

Tinubu said this on Thursday in Abeokuta, Ogun State when he addressed the leaders and members of the party.

The former two-term Governor of Lagos State, who spoke largely in Yoruba during his address, said he was there for Buhari when the then candidate of the All Peoples Party, rechristened All Nigeria Peoples Party, and later Congress for Progressive Change lost his elections to be president thrice.

He also said that for the first election that brought Buhari to power in 2015, the then presidential candidate of the APC offered him the vice presidential ticket, which he then handed over to the incumbent, Prof. Yemi Osinbajo.

He said he has now become tired of “enthroning” his “children” as political office holders and that his turn to take a shot at the presidency had come.

Tinubu said in part in Yoruba: “If not for me standing in front of you that threatened war, that said Buhari move forward and let’s go ahead with it, he would not have become president.

“He did the first one, he fell down.

“He did the second one, he fell down.

“He did the third one, he fell down.

“And he was then crying on television, saying in his life he will never run again.

“I then went to meet him in Kaduna that you will run.

“This is not a matter of crying.

“I will stand by you.

“And you will be elected.

“The only condition is that you will never joke with the affairs of Yorubaland.

“I now said this time around o, it is the turn of the Yoruba.

“And if we pick from among the Yoruba, it is my turn.

“The one that I have protected the children I am carrying is enough.

“I also want to be president.

“I don’t want to be consigned to the dustbin of history.”

Tinubu also gave a hint of the thinking of President Buhari on his would-be successor in 2023.

He said it was the turn of the South now as only the North cannot continue to rule Nigeria.

Recall that the major opposition party at the federal level, the Peoples Democratic Party, has already elected former Vice President Atiku Abubakar as its presidential candidate.

It was the decision of the PDP to leave the presidential contest open that led a former Anambra State governor and Abubakar’s running mate, Peter Obi, to leave for the Labour Party.

Obi has since emerged the candidate of the Labour Party for the 2023 polls.

Tinubu added at the meeting in Abeokuta on Thursday: “I have been there from the days of the Alliance for Democracy through the Action Congress of Nigeria and which eventually metamorphosed into the APC.

“I have served for over 25 years and helped many achieve their political ambitions.

‘Your Governor, Dapo Abiodun, could not have become governor without God’s and my support.

“Go and check the video.

“They did not want to hand over the party’s flag to him as the APC flag bearer for the 2019 gubernatorial election in Ogun.

“I was the one that insisted that it should be given to him….”

He said it was the same way in which he sacrificed the position of vice-president offered to him by Buhari in 2015 for Prof. Osinbajo, whom he nominated.

Tinubu, therefore, appealed to the delegates to vote for him to clinch the party’s ticket for the 2023 presidential election.