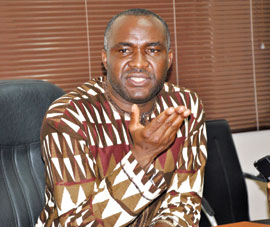 A pro-democracy Non-Governmental Organization, the Human Rights Writers Association of Nigeria, has asked the Governor Babangida Aliyu-led Northern Governors Forum not to proceed with the rumoured plot to destabilize the ongoing National Conference.
The plot was said to have arisen because of the far-reaching decisions of the National Conference meant to address longstanding issues of geopolitical inequities that were passed, particularly the unanimous decision of the conferees to demand creation of additional states in the South East to bring the zone at par with other geopolitical entities in the federation.
The Northern Governors Forum has also been tasked to fulfill its reported pledge to end violent insurgency, which originated in the North East, but now obviously tearing apart Nigeria.
This was as the Rights group said the timeframe of two months reportedly given to Nigerians by the Northern Governors to end the violent insurgency decisively has far gone and that the Northern political class rather than concentrate on resolving these worrying and threatening signals to Nigeria’s unity and territorial integrity, are chasing political shadows and plotting subterranean schemes to destabilize Nigeria.
HURIWA stated thus: “Governors must not hide under section 308[1] which gives them immunity from prosecution to enact anti-Nigerian agenda which are capable of destroying the fragile peace that exists amongst the divergent people of Nigeria. The plots to introduce dangerous parochial and pedestrian regional agenda as against national agenda by any group of people within the political class irrespective of their geopolitical loyalties should and must be resisted by all and sundry if we still hope to maintain a united political entity under God. Democracy is all about give and take and this practice must be devoid of blackmail or subtle threats since no particular group of people have the monopoly of violence. All those who love pan-Nigerian consensus and national unity must unite to stop any group of people that would use their high profile positions in the polity to destabilize Nigeria.”
In a statement signed by the National Coordinator, Comrade Emmanuel Onwubiko, and the National Media Affairs Director, Zainab Yusuf, HURIWA stated that it was disturbed that in spite of the widespread media report that members of the Northern Governors Forum planned to invade the nation’s capital to lobby the delegates from the Northern political bloc to boycott the remaining sessions of the National Conference and/or to destabilize the harmony currently existing among the delegates, the hierarchy of the NGF has not debunked and/or dismiss the stories making rounds.
HURIWA added: “Since there is no smoke without fire, we at HURIWA are compelled to think that there may indeed be some sinister plots to destabilize the national conference and by so doing set the stage for the eventual escalation of political warfare which may not augur well for the wellbeing of the nation and will definitely not serve the overall national interest of the general public.
“HURIWA hereby sincerely appeals to the esteemed members of the Northern Governors Forum to eschew bitterness and use their high offices to galvanize support for a national consensus building based on mutual respect, national harmony, equity, social justice and the respect for the fundamental human rights of all citizens and the enthronement of the Principle of Rule of Law. We appeal to the Northern Governors to work out and implement effective and efficient counter-terrorism measures together with the national government so as to restore lasting peace and salvage Nigeria from imminent and present danger of disintegration and destabilization by armed agents of anarchy and lawlessness. We must at all times use our public offices to promote only those virtues that will bring about progress, unity and oneness of all Nigerians irrespective of our political, religious and cultural affinities and we must do everything within our power to consolidate democracy and build strong institutions of the judiciary, the police and the defence sector that would be devoid of corruption and total lack of accountability and transparency. All those who cause havoc and terrorism must be made to face the full weight of the law for that is the best way going forward.”