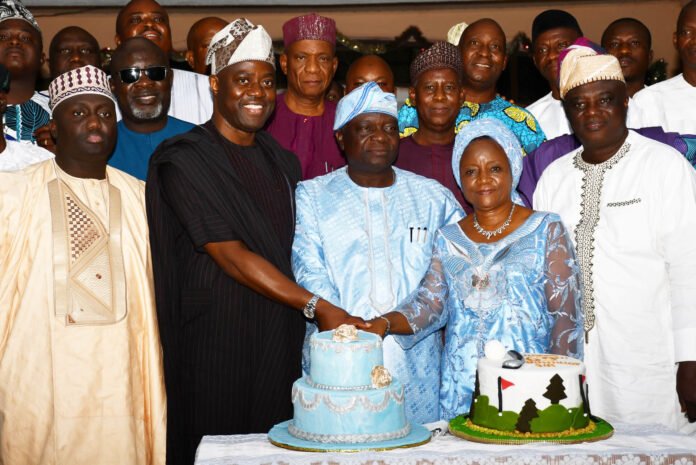 Former Governor Olagunsoye Oyinlola of Osun State has said indiscipline started the crisis in the Peoples Democratic Party.
A statement issued by Taiwo Adisa, the Chief Press Secretary to Governor Seyi Makinde of Oyo State, on Tuesday quoted Oyinlola as making the declaration on Monday evening when Makinde and some national officers of the PDP visited him in his country home in Okuku, Osun State while marking his 69th birthday.
The statement indicated that Oyinlola said it was rather unfortunate that the crisis started with him, explaining that he was duly elected as secretary of the PDP, but was removed overnight.
He said: “Some people felt it was injustice and could not let it go, one thing led to the other and before we knew it, seven governors came together and decided that they would leave the party.
“In fact, the movement was to serve as a scare-crow, we wanted to give them the fear so that they would call everybody to discuss the problem and settle it amicably.
“But sentiment came from the leader and he said the agitating governors had no electoral value.
“Having said that seven serving governors lacked electoral value was the height of arrogance and lack of belief in the Lord.”
The former National Secretary of PDP, however, stated that whatever it was that he had achieved as a politician was on the records of the party.
Oyinlola said he was overwhelmed by the display of brotherhood and cordiality extended to him by Makinde and the national officers of the PDP.
He noted that there would be avenues for further talks and that whenever he was going to make a decision on where next he would be going politically, it would be in the open.
He said: “One thing you must understand is when you see an animal that says it does not love food and anytime you see it moving close to the food, there is a relationship.
“For the sake of today, I thank you and your entourage for honouring me.
“It takes a Christian mind of yours to remember that there is somebody somewhere who was part of you and feel you should celebrate on a day like this.
“We had an association with many other people but it never occurred to them.”
Makinde, who was in company with national officers of the PDP as well as some leaders of the party in the South West geopolitical zone and members of his cabinet, said the visit was all about Oyinlola’s 69th birthday celebration,
The National Publicity Secretary of PDP, Kola Ologbondiyan, urged Oyinlola to always make his doors open to the party, saying the national leadership of the party would continue to seek his wisdom and experience.
Dignitaries at the occasion included Deputy National Secretary of the PDP, Dr. Agbo Emmanuel, and National Organising Secretary, retired Colonel Austin Akobondu.