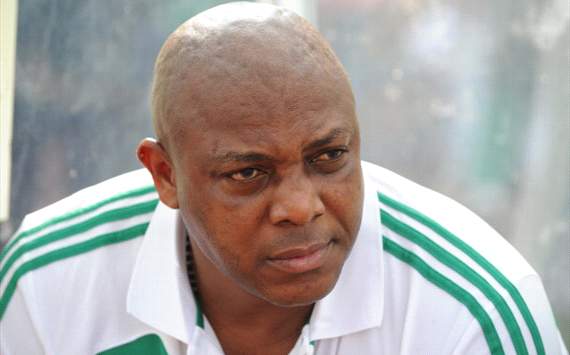 Super Eagles Head Coach, Stephen Keshi, on Saturday in Kaduna said the home-based team would get better with time in spite of their performance against the Elephants of Cote d’Ivoire.
The Eagles defeated the Ivorians 4-1 in a 2014 African Nations Championship qualifier final round first leg match.
Speaking at the post-match press conference at the Ahmadu Bello Stadium, Kaduna, Keshi said that he was happy and satisfied with the performance of his team.
He said: “Considering the fact that this is a new team and we only had four days of training sessions, I think we have a team in the making.
“They were able to understand themselves and still went on to win against the visiting team.
“I think we only need to wait for this team to mature.
“And it won’t be too long.”
The former Eagles captain however said it took him and his technical crew colleagues a lot of teaching and talking before the players understood the tactical play for the match.
He added that the team would start scoring more goals very soon and he would not worry about their proficiency in front of goal.
Keshi said: “I want the team to qualify first for the championship, so as to make Nigeria proud.
“Thereafter, all other things will follow.”
Keshi however said he was happier with the fact that the players’ performance level was growing everyday.
Speaking also at the conference, the Nigerian team captain of the match, Chigozie Agbim, also commended his teammates, saying: “It was a good performance on the part of my teammates.”
On the level of relationship among the team’s players, the goalkeeper said he did not have problem with them before and during the match.
Agbim said: “Coming from the main Super Eagles, which won the AFCON title last February in South Africa, I saw no difference in the two teams.
“I only expected teamwork before and during the match, and we had that.
“This is what helped us to win today (Saturday).”