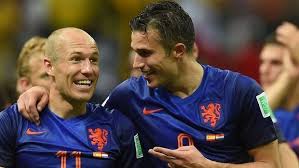 Holland secured a dramatic 3-2 win over Australia in a thrilling World Cup Group B encounter in Porto Alegre.
In an engrossing match, the Aussies showed plenty of grit and determination and no shortage of skill but will now probably be the first team to exit this summer’s tournament.
Louis Van Gaal named an unchanged starting line-up for the Dutch, meaning Lazio target Stefan De Vrij took his place in the side once more. Arjen Robben and Robin Van Persie looked to build upon excellent individual displays against Spain last Friday.
Australia meanwhile made two changes to the team beaten 3-1 by Chile. They knew that defeat to the Dutch would all but confirm they cannot make the Last 16.
However, a cheap concession of possession by the Socceroos on 20 minutes was punished severely. Robben picked up the loose ball and raced through the Aussie half before powerfully firing beyond Mat Ryan.
Less than 60 seconds later, though, the Socceroos were level in spectacular fashion. Their talisman Cahill got on the end of Ryan McGowan’s cross to arrow a sensational volley past the helpless Jasper Cillessen.
The second period began at a high tempo with the Aussies almost catching their opponents cold once again. Cahill had the ball in the next once again but the goal was chalked off for what seemed a harsh foul.
Daryl Janmaat was harshly adjudged to have handled the ball in the box at point blank range and Algerian referee Djamel Haimoudi pointed to the penalty spot. Mile Jedinak made no mistake to smash home and put the Socceroos into a shock lead.
Once again, though, the scores were level again soon after. Van Persie beat the Australian offside trap to get on the end of substitute Memphis Depay’s through ball and rifle in for his third goal of the tournament.
The Dutch then went straight up the other end of the field and Depay let fly from range. It should, in truth, have been saved by Ryan but the keeper allowed the ball to squirm agonisingly into the bottom corner.
In a thrilling game, the Aussies did all they could to snatch a draw but they ultimately ran out of steam. Ryan made two more good saves to keep them within one goal but ultimately it was in vain.
Holland, with two wins from two, can now in all probability look forward to the knockout stages.