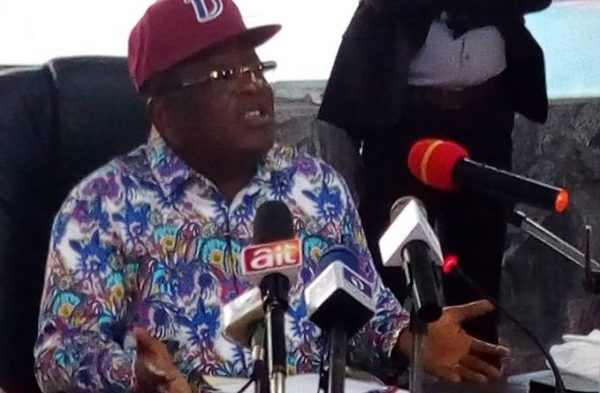 The Ebonyi State government on Wednesday said it has confirmed that the recent attack on Umuogodo Akpu and its neighbouring villages of Ngbo, Ohaukwu Local government Area of the State were perpetrated by the Agila people of Benue State.

He however, noted  that State investigation revealed that the Agila people hired herdsmen mercenaries to execute the killings and destructions in the area.

The revelation was made by the Governor, David Umahi, when he briefed newsmen at the end of State Security Council meeting in Abakaliki.

Umahi regretted that the  Ministry of Humanitarian Services and the National Emergency Management Agency have not delivered any palliative to the affected persons in Egedegede and other villages in Ishielu LGA recently attacked by herdsmen in spite of the promises by the Vice President, Yemi Osinbajo (SAN), during his recent fact finding visit to the State.

He however noted that the State Government has put together some palliatives for both the Egedegede people and those of Effium, which would be distributed through the State Peace Committee.

He praised the commitment of the stakeholders of Effium, Ohaukwu LGA to.peace after the intra-communal war between Effium and Ezza-Effium people of the area.

Umahi during the event handed over a cheque of N40 million earlier pledged by the State Government for their rehabilitation.

He also handed another N40 million cheque to the Egedegede people as part of their palliative.

He explained that each of the beneficiary communities should employ the sum of N20 million to rehabilitate affected persons and families, while the balance should be used to set up their compulsory community vigilante, whose personnel would be paid by the State Government.

Umahi explained: “We can now confirm.as a State that Agila people of Benue State hired the herdsmen mercenaries that did the killings in Ngbo.

“We are determined as a State to do everything humanly possible under the law to protect our people.

“Today, we have the Effium people here, and I want thank them, thank the Security agencies and thank CAN (Christian Association of Nigeria) so much.

“I am confident  that peace has returned to Effium, from the news I’m getting, and I have directed them to employ some youths into a vigilante committee, that I will fund, so that the relationship can be sustained.

“Then we will come in as state to see how we can help our mothers over the destruction of their living places.

“So I want Effium to remain peaceful.

“We have rice, we have money, we have wrappers to help our mothers and children.

“We will also reach out to the affected communities in Egedegede.

“Unfortunately, the succour from the Federal Government has not arrived and that is why we are making some plans to see how we can help our people.

“Right now we have a total of N40 million for Egedegede community: N20 million to be given to those who lost their persons and those whose houses were burnt so that at least they can get something to live in, and N20 million is to enable them buy uniform, boots and motorcycles for the local vigilante I have directed to be set up in that community.

Recall that apart from the intra-community war which recently ravaged Effium community, there was an attack on Umuogodo Akpu and Ngbo, both in Ohaukwu LGA, resulting to killings, with scores rendered homeless.

Also in Egedegede Community and other adjoining villages, suspected herdsmen attacked the people, killing some and burning houses.

There has been argument on the real attackers of the people of Ngbo, with some attributing it to herdsmen, while others said it was done by the Agila people.

There has been a long standing land dispute between the said parts of Ngbo in Ebonyi State and the Agila people of Benue State.

The Governor’s briefing added further credence to government’s earlier position on the attack.