Agoro: Nigerians are hungry, angry with Buhari; backs Tinubu for 2023

Dogara, like Akpabio, is a coward, by Ikenna Ellis Ezenekwe

An 80-year-old herbalist, Ussaini Musa, and two others have been arrested by operatives of the Katsina State Police Command for allegedly beheading and removing the eyes of a Police Sergeant, Unana Ishaya.
The Police Sergeant was attached to 56 PMF, Special Duty, Operation Safe Haven, Jos, Plateau State.
The Katsina State Commissioner of Police, Muhammadu Wakili, paraded the suspects on Wednesday.
Wakili gave the names of others as Abubakar Sani, 35, and Abubakar Muhammed, 28.
While Sani resided in Katsina, Muhammed and Musa resided in Jos.
He said the victim was in mufti when the incident happened.
He said the suspects beheaded and removed the eyes of Ishaya for charm.
The suspects allegedly told the herbalist that they wanted the invincible jacket to enter a house where huge sums of money were kept.
The herbalist reportedly told them to get the eyes of a human being who was alive as part of items to make the jacket.
Sani said they wanted to use the charmed jacket to rob the office of the Economic and Financial Crimes Commission in Jos, where they suspected there was huge amount of money, without resorting to forceful break in.
Wakili said: “So they surprised the officer, who was on a special duty at a joint, though not in uniform, and beheaded him.
“According to them, the policeman was drunk, though an investigation is in progress to ascertain what happened.
“Part of the requirements is to dry the eyes.
So they were arrested while drying the eyes in their apartment.
“The suspects have confessed to the crime, each stating the roles he played.
“They will be arraigned immediately investigation is completed.”
The eyes of of the policeman were among exhibits recovered from the suspects. 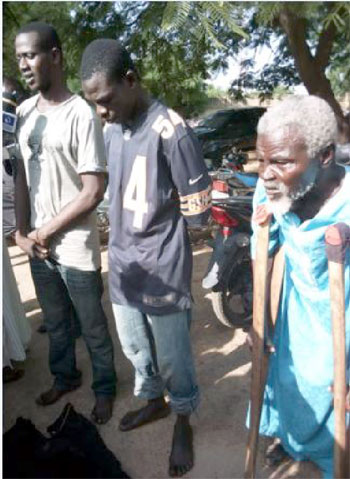 Agoro: Nigerians are hungry, angry with Buhari; backs Tinubu for 2023

Dogara, like Akpabio, is a coward, by Ikenna Ellis Ezenekwe

CAN calls for action to stop Kaduna killings