Help! Our husband’s people have rendered us homeless — Two widows 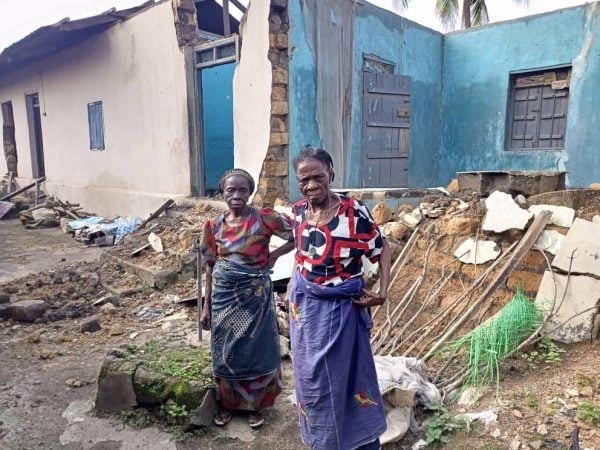 Two co-wives and widows, Ogeri and Margret Agbi, have raised an alarm over alleged plan by their late husband’s nephew to sack them from their husband’s home.

They raised the alarm while speaking with newsmen on Wednesday in Afikpo.

They alleged that their husband’s nephew, Azubuike Agbi, in collaboration with his brothers had hired tugs to demolish their house, rendering them homeles, and destroying their household properties worth millions of naira.

Narrating their ordeal, the widows stated that the house in question belonged to their late husband and his late brother, Okwa Agbi, by inheritance.

They explained that sometime ago, the family house was shared into two by the community, with them occupying one section and their late husband’s brother’s family, including Azubuike, having the other.

They alleged that Azubuike had earlier asked them to quit the building, claiming ownership, and his plans to demolish the building and erect a new one in its place.

The duo wondered why Azubuike, with his cronies, would encroach into their abode to wreck such havoc, calling on the government and good spirited individuals to come to their aide.

One of the widows, Ogeri, narrated: “Our husband died some years ago.

“They gave us notice to pack out.

“We have been living peacefully in this compound until when they came and told us that they want to rebuild their own side of the building and later migrated to our own side, and demolished it.

“My late husband and his brother inherited this building from their mother and was divided for both of them to live.

“The issues we had with them in the past was settled by Ukpa Community when they divided the compound into two: one side was given to my husband, while his elder brother had the other.

“And we had no issue recently that could warrant this type of wickedness.”

Corroborating the story, Margaret lamented: “I never knew that the children of my husband’s brother could demolish our house for no just cause.

“They destroyed the building, including the properties inside the house.

“All our cushions, chairs, bed, fan, television, lamp, kitchen utensils, my wrappers and other things were all destroyed.

“I want government to come to our rescue.

“You can see how we are struggling to earn a living.”

A son to one of the widows, Anelechi Agbi, explained how  his cousin hired some group of boys on July 18, 2022, allegedly led by one Hart Okwa, to come and demolish the building, but was prevented following an alarm raised by a commercial motorcyclist.

Anelechi said: “They ran away, but on 26th July, those boys came again with all manner of weapons such as machete, axe, gun among others and succeeded in demolishing part of the building, including the fence and the properties inside it.”

Every effort made to hear from Azubuike and Okwa proved abortive as Azubuike was said to live abroad.

Okwa, however, insisted that he was not disposed to react unless the media informants were revealed to him.