Haye’s rematch with Bellew gets date 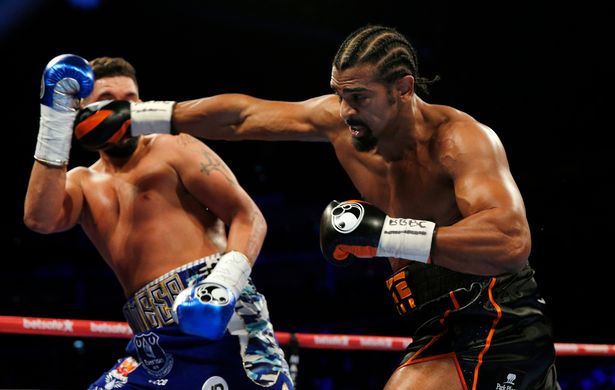 The postponed rematch between former heavyweight world champion David Haye and fellow Briton Tony Bellew has been scheduled for May 5 in London, according to promoter Eddie Hearn.
Bellew beat Haye after a thrilling 11-round bout in March and their rematch was earlier scheduled for December 17.
But the 37-year-old Haye pulled out after suffering a bicep injury in a freak accident.
“I‘m thrilled to confirm that the rematch between myself and Tony Bellew will take place on May 5 at the O2 Arena,” Haye told promoter Hearn’s website Matchroom Boxing.
“Tony has boasted that the rematch gives him the opportunity to force me into retirement. Unquestionably, I step into the ring in May with both my career and legacy on the line.”
WBC cruiserweight world champion Bellew has also vowed to end the career of compatriot Tyson Fury, who is hopeful of returning to the ring next year.
“I‘m pleased to get a new date in the diary and I look forward to giving boxing fans a great night on May 5… my mind is still very much on this fight and I will punish him,” Bellew said.
“I now have a very clear plan for 2018 and that is to knock out David Haye and then knock out Tyson ‘Stavros Flatley’ Fury and end both their careers…”
Former world heavyweight champion Fury is waiting for the conclusion of a UK Anti-Doping hearing and is yet to renew his boxing licence.
Reuters/NAN.