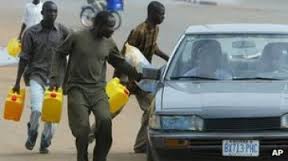 Some young men are capitalising on the ongoing fuel scarcity in Lagos to make money by hawking the product, the News Agency of Nigeria reports.
A check by a NAN correspondent indicated that the young men were seen carrying various sizes of fuel-filled gallons as they hustled for customers in different parts of Lagos.
Some of the areas visited by NAN included Oshodi, Maryland, Jibowu, Ojuelegba, Fadeyi, Mushin, Surulere, Oyingbo and Costain.
It was also observed that the few petrol stations that had the product product had long queues of people and vehicles.
NAN reports that the while the petrol stations were selling at the pump price of N97 per litre, the hawkers were selling the same quantity at N120 or more.
It was observed that 20 litres of fuel, which sells for N1,940 at the official rate, was being sold by the hawkers at between N2,500 and N3,000.
One of the youths, who simply gave his name as Uche, told NAN that he spent over five hours to buy 50 litres of fuel on Saturday.
Uche said: “I suffered to buy this fuel, so I must make my gain from it.
“I bought it for N4,850 and I know that I can sell it for over N6,000.
“This is a good opportunity for some of us who are unemployed to make quick money.”
Another hawker, Afolabi Ojo, said he had to join his friends in the business because he needed money to set up his tailoring trade.
Ojo said: “I am a trained tailor but I have not been able to raise money to rent a shop.
“That is why I joined my friends to come here to sell fuel in jerry cans.
“I have sold five jerry cans of 25 litres each since yesterday (Saturday) and I only have two more left.”
He said the hawkers buy the fuel through one Usman, who had contacts with some of the petrol stations in the Maryland area of Lagos.
Ojo added: “It is Usman who has been helping us.
“When we want to buy fuel, he will follow us to the petrol station and talk to the fuel attendants on our behalf.”
A motorist, Olalekan Ogunrinde, told NAN that he had to patronise the hawkers because he could not get fuel from the petrol stations.
Ogunrinde urged the Federal Government and the marketers to work together to end the scarcity of the product.
He said: “Under this government, we have been enjoying the availability of petrol, even during the yuletide period.
“I am appealing to the marketers to cooperate with the government to end this scarcity.”
Another motorist, Wahab Oyedokun, said he would not buy fuel from the road side sellers because the product could be adulterated.
Oyedokun said: “I have had a bad experience in the past which taught me a lesson.
“I bought fuel from one of them and it affected my car engine.”