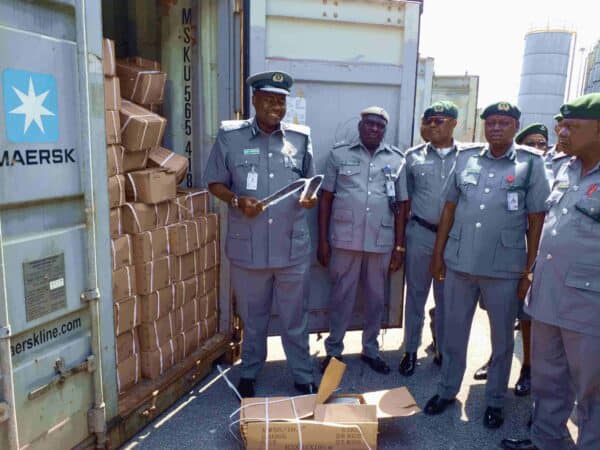 The Nigeria Customs Service, Port Harcourt Area II Command, Onne Port has collected a total of N54,129,704,653.73 between January and June 2019 with seizures worth N443,304,711 in the last six months.
At a press briefing on Tuesday, Comptroller Galadima Saidu told newsmen that the collected figure for first half 2019 translates to 15 per cent increase above the  N46,260,300,287.86 collected within same period of 2018.
Saidu added that it represents 57 per cent achievement of the annual revenue target of N95.7 billion set for the command in the year 2019.
The Command as well recorded seizures of 34 containers with Duty Paid Value (DPV) of N443,304,711.00 in the first six months of the year.
While reiterating that the command under his watch will continue to be a no go area for non compliant traders, Saidu gave a breakdown of seizures achieved within the period.
According to him, efforts are sustained in top gear by the Officers and Men of the Command to reduce smuggling to its barest minimum.
He disclosed that 2x20ft containers comprising 2,200 jerry cans of 25 litres of vegetable oil with Duty Paid Value of N26,136,496.00; 4x20ft containers comprising of 6,456 cartons of foreign soap (detergent) worth N74,947,617; 1x20ft container loaded with 57,300 pieces of machetes valued at N16,115,234.00; 1x40ft container loaded with scrap metal of various sizes and types worth N5,386,979.00; and 24x20ft containers comprising of 10,800 packs of corrugated aluminium roofing tiles/sheets and its accessories with DPV of N290,823,551.00.
Other seizures he listed included 1x 20ft container comprising of 315 bales of textiles (wax material worth N18,495,395.00; 69 bags of imported rice and 329 bales of clothing (assorted wears) amounting to N10,725,658.00.
Saidu said: “The above profile revealed a testament to the determination, resilience, doggedness and vigilance of the Officers and Men of this Command, who have engaged the responsibility of being efficient gate keepers of our entry points, while facilitating genuine and honest trade.
“The total of N751,221,517.94 was recorded for Nigeria Export Supervision Scheme, which is higher when compared with last year’s record of N563,751,085.00, which shows that the Command achieved outstanding feats in its export activities within the period under review.
“We have consistently made it clear that the Command welcomes only compliant traders who are willing to operate in accordance with extant laws and guidelines.
“We have also shown a clear resolve to deal ruthlessly with importers and agents who manifest a recalcitrant attitude to obeying Customs laws.
“Since we are in a modern Customs environment, we maintain open lines of communication between all governments agencies at all times.
“The process of information sharing within the agencies goes a long way in assisting us to identify and neutralise all possible avenues that could lead to compromises in revenue and security.
“The seizures made so far are products of synergy between the Command, other units within the service and other security agencies.
“These units include Customs Intelligence Unit, CGC Strike Force, Valuation, Customs Police and Post Clearance Audit, while other security agencies include the Nigeria Police Force, Nigeria Immigration Service, the Nigeria Ports Authority, officers of Standard Organization of Nigeria, National Agency for Food and Drugs Administration and Control and Nigerian Navy.”