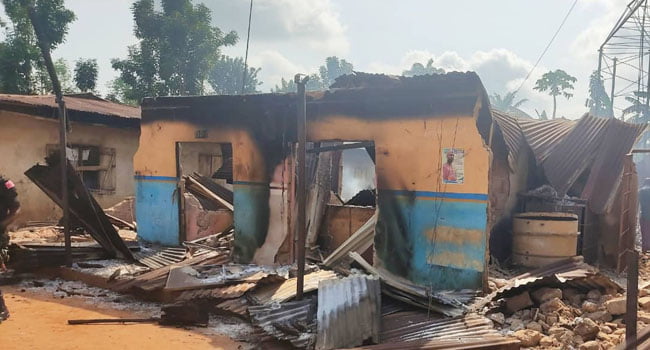 The confirmation was contained in a statement by the Spokesman of the Enugu State Police Command, ASP Daniel Ndukwe, on Wednesday.

Ndukwe stated that the station “was violently attacked and set ablaze at about 2.30am by yet-to -be identified gunmen”.

He further stated that operatives on duty during the attack engaged the assailants in a gun battle, adding that some of them escaped with gunshot injuries.

“Unfortunately, two policemen were critically wounded and later confirmed dead in the hospital,” he added.

He stated that the Commissioner of Police, Mohammed Aliyu, had consequently ordered the deployment of operational and intelligence assets to fish out the attackers.

According to him, the Commissioner gave the order during an on-the-spot assessment visit to the station, together with heads of other sister security agencies in the state.

Ndukwe said Aliyu had commiserated with families and relations of the deceased policemen.

He added: “The command appeals to members of the public to assist it with timely and credible information that will aid the quick arrest of the assailants.

“Residents, especially owners of medical facilities, should promptly report to the police anyone suspected to have gunshot injuries.”

The News Agency of Nigeria reports that police formations in the South East have recently come under severe attacks by gunmen, resulting in wanton killings and destruction of property.

Nigeria not aware of $875m ammunition deal with US – Lai Mohammed