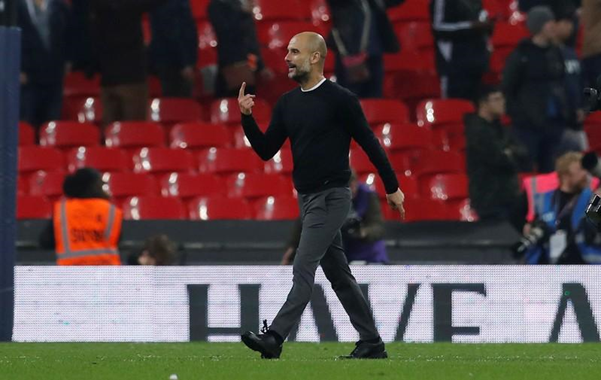 Pep Guardiola has been inducted into the League Managers Association Hall of Fame.
The Manchester City boss was recognised at an LMA event on Thursday evening, where he received a commemorative shield from Gareth Southgate and Sir Alex Ferguson alongside fellow inductee, Jurgen Klopp.
The LMA Manager of the Year in 2018, Guardiola expressed his pride for the latest acknowledgement of the unprecedented success he has achieved since his arrival at the Club in the summer of 2016.
“It’s a privilege,” he said.
“When you come down the corridor you see all the big managers who have been here to help make football better, to make the football we have right now. Of course, it’s an honour.”
Under Guardiola, City have broken countless records in English football, lifting seven trophies in three seasons.
In 2018/19 we became the first Club in to win all four men’s English trophies in a single campaign, whilst our league title that year saw Guardiola become the first manager in a decade to retain the Premier League.
Twelve months earlier the 48-year-old was crowned LMA Manager of the Year.
He was the first City boss and the first Spaniard to receive the award, but having been inducted into the Hall of Fame, Guardiola paid tribute to the players he feels fortunate to have worked alongside.
“Big clubs and big players,” he added, when he asked what he attributes his success to.
“I think all the managers in the Hall of Fame were in incredible clubs with incredible players. There are no secrets.
“Without the quality of the players that you have, the managers cannot have success.”
Guardiola is the 11th LMA Hall of Fame inductee to have managed City.
He joins Steve Coppell, Sven-Goran Eriksson, Brian Horton, Kevin Keegan, Howard Kendall, Roberto Mancini, Joe Mercer, Stuart Pearce, Manuel Pellegrini and Joe Royle on the list.