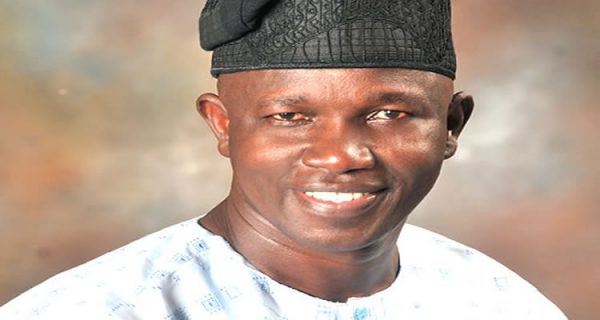 The Minister of Sports and Youth Development, Sunday Dare, has been commended for his straight and practical approach to grassroots soccer development in Nigeria with the success of the maiden edition of Sunday Dare Grassroots Soccer tournament, which came to an end on Sunday in Ibadan, Oyo State.
A sports enthusiast and grassroots politician, Alhaji Kehinde Olaosebikan, gave the commendation at the Obafemi Awolowo Stadium in Ibadan on Sunday.
Olaosebikan declared that Nigeria and Oyo State would benefit immensely from the minister’s hands-on synchronisation of sports development across the country.
Speaking to journalists at the end of the tension soaked final that saw Ogo Oluwa/ Surulere Team defeating One Ibarapa Team by a lone goal to lift the trophy, Olaosebikan stated that the personal involvement of Dare in mobilizing, hunting and discovery of talented soccer players from the hinterlands would give the nation, states and local government areas the best in terms of performances and quality of sporting infrastructure.
Olaosebikan, who was a member of the first executive committees of the Sports Writers Association of Nigeria in Oyo and Niger States, said: “This is leadership by example. As the Minister puts conducive structures and policies in place to encourage organizations and well endowed individuals to partake in the development of sports, he is personally walking the talk by using his hard earned money to lift soccer and players at the grassroots. This is profound!
“In a very brilliant way, Sunday Dare has synchronised his three point agenda for an all round sports development in Nigeria with the introduction of Adopt An Athlete programme for the promotion of welfare and progress of athletes all over the country; Adopt A Game programme for the development of all the games and Adopt A Stadium programme for accelerated rehabilitation and further development of our stadia.
“To the hard work, zeal and commitment of the cerebral minister, the programs have started yielding fruits with major African business players including the richest man on the continent, Alhaji Aliko Dangote acceding to rehabilitate MKO Abiola Stadium in Abuja. This is indeed a new dawn in our sports development. With Sunday Dare, we are getting there steadily. He deserves our encouragement and support.”
For two weeks, talented football players from across the 14 federal constituencies of Oyo competed for the SD Trophy, engendering opportunities for display and discovery of talents among the abundant latent soccer talents in our local areas.
Not just mere playing and winning trophies, the Minister mobilised influential ex-international footballers to the opening of the tournament in Ogbomosho and its final at the Obafemi Awolowo Stadium, Ibadan.
In what many referred as an excellent strategy, the ex-international players were there not just to watch and discover talents, they were brought in by Dare to mentor the local players, most of whom saw the ex-Super Eagles stars physically for the first time at the tournament.
Chief Festus Onigbinde, the best indigenous coach ever in Nigeria, led the pack and was at the stadium throughout the tournament, while Daniel “The Bull” Amokachi was the cynosure of all eyes.
Amokachi was hailed, hugged and took hundreds of selfies with players and spectators.
The newly appointed Assistant Coach for the Super Eagles, Joseph Yobo, was obviously on duty throughout as he was busy watching and making notes.
The Headmaster, Mutiu Adepoju, Ike Shorumu, Felix Owolabi and others joined to mentor the local players who displayed dexterity of the round leather game.