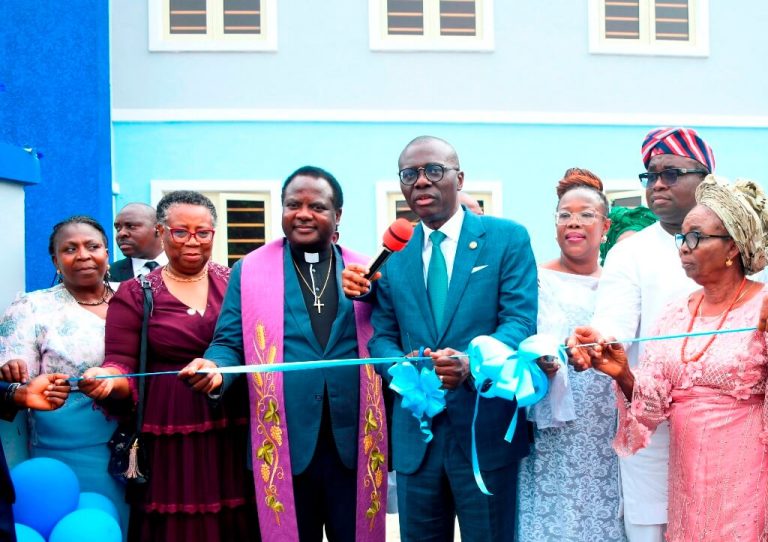 Lagos State Governor Babajide Sanwo-Olu was the special guest at Baptist Academy in Obanikoro, on Tuesday, where he identified with a noble cause.

Governor Sanwo-Olu inaugurated a 140-bed hall of residence built by an old student of the missionary school.

The single-storey dormitory, named: “Kikelomo Hall,” was donated to the school by Ayodeji Fadoju of 1988 set.

The edifice is named after the donor’s mother.

Sanwo-Olu commissioned the students’ hostel amidst ecstatic jubilation by pupils, their teachers and members of Baptist Academy Old Students’ Association.

The Governor said the project represented a “befitting intervention”, which alumni associations could use to support their alma maters and provide platforms for academic advancement.

Sanwo-Olu said: “This is a clear testament to the can-do spirit of Lagosians and everyone who see themselves as partners of Government in expanding progress and ensuring that we can leave behind legacy that will outlive us.

“This is one of the ways we can use our resources and talents to better our communities and leave enduring endowment behind.

“I feel highly encouraged to come and identify with this noble cause when I saw the pictures of this beautifully designed edifice.

“This is a landmark intervention from an old student to boost education access at his alma mater.

“This is a clear example for everyone of us, as interventions such as this can be identified by Old Students’ Associations across our schools to change lives of students.”

Sanwo-Olu used the opportunity to lists investment and interventions provided by his administration to raise physical and learning standards in Lagos public schools.

He said his Government had delivered over 1,000 new classrooms to bolster access to education and make learning easier for pupils.

The Governor said school enrollment under his administration increased as a result of provision of over 300,000 units of composite furniture for pupils’ convenience.

He said 55 fully equipped laboratory and 45 furnished libraries were built for students across the State-owned schools.

Introduction of technology in basic learning, Sanwo-Olu said, had improved the pupils’ output, while helping the State to checkmate truancy and absenteeism in public schools.

“Our direct intervention in education has been far-reaching. We have touched the entire ecosystem in the education; this has helped us in organically raising the quality and standards of education,” the Governor said.

Sanwo-Olu praised the donor for giving back to his academic community, encouraging other old students to emulate the example and leave enduring legacy.

Fadoju said he felt compelled to donate the dormitory to the missionary school because the site on which the project was erected had an old bungalow that did not befit the school.

He said the school built a good foundation of academic excellence and moral values in him, noting that the best way to give back was to initiate project that would benefit students.

He said: “One of the reasons for embarking on this project is not because the donor has excess funds, but because I believe it is only the responsibility of the Government or the mission to look after the generations that will take Nigeria to a better place.

“I appeal to the school community and beneficiaries of this project to see it as a gift to be nurtured.”

The President of the Nigerian Baptist Convention, Rev. Dr. Israel Akanji, described the donor as “a shining example”, while expressing the mission’s gratitude to Fadoju and his family for the initiative.