Governor locks out SSG, others for lateness 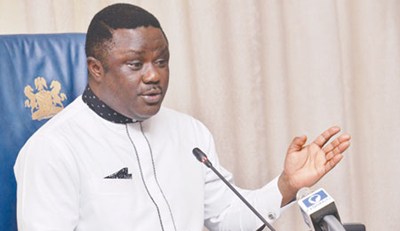 The Cross River State Governor, Prof. Ben Ayade, on Wednesday locked out top political appointees and civil servants at the Government House, Calabar for resuming late.
Reports had it that Ayade arrived his office before 7.30am.
He was said to have ordered that the gate be locked while he monitored activities at the gate with the CCTV device from his office.
The Deputy Governor, Prof. Ivara Esu, barely made it.
Esu was said to have arrived at about 8am and was allowed to enter.
So also did the Chief Press Secretary to the Ayade, Christian Ita, make it.
Its was said to have been in the office long before 8am.
However, the Secretary to the State Government, Tina Agbor, was not that lucky.
Agbor and other civil servants were locked out for coming late.
The gates were, however, opened by 9am with some members of staff were allowed to go in while those who came after then were turned back.