Governor doles out N100m to 152 youths for renouncing thuggery 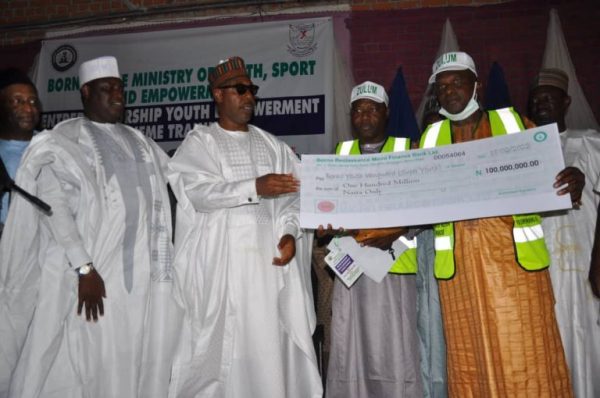 The Governor made the donation to the repentant thugs on Friday in order to enable them set up their own businesses.

Zulum, who inaugurated the disbursement exercise in Maiduguri, said the gesture was to assist the youths who completed a one-month entrepreneurship training to engage in productive activities and contribute to the social and economic development of the state.

He said that 16 of the beneficiaries would received N2 million each as seed capital, while 136 others would get 500,000 each.

According to him, the beneficiaries are expected to repay 50 per cent of the money given to them in three years.

The governor also announced scholarship award to one child from each of the beneficiaries family, adding that the state government would sponsored their education.

“You engaged in thuggery for many years, but have nothing to show, with what we are giving you if you have good intention and the will to change, you’ll change for the better,” he said.

In his remarks, Alhaji Saina Buba, Commissioner for Youth, Sports and Empowerment, said the beneficiaries had been supported under a special programme tagged: “Super Youth Entrepreneurship Training.”

Buba said: “It is the first time in the state that many of the youths who engaged in thuggery since 1999 would be train and get support.

“We hope it will go a long way in addressing thuggery in the state.”

One of the beneficiaries, Tijjani Daga, lauded the gesture and pledged to ensure effective utilisation of the support to improve their lives.

“We are grateful to the governor for the support, and from today it is bye- bye to thuggery,” Daga said.