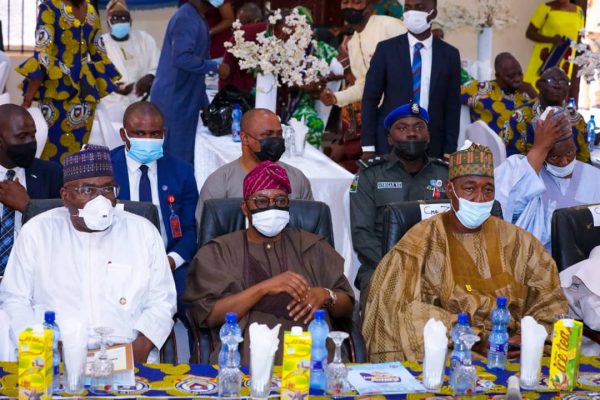 Governor Adegboyega Oyetola of Osun State has described his Borno State counterpart, Prof. Babagana Zulum, as a man of strong character and conviction, who is determined to carry on notwithstanding the daunting security challenges in his state.

A statement by Ismail Omipidan, the Chief Press Secretary to the Governor, on Saturday in Osogbo, said Oyetola made the remarks at the 2021 Luncheon and Awards ceremony of the University of Ibadan Alumni Association.

The statement said that Zulum was honoured at the event by the association as both Most Distinguished Alumnus and Alumnus of the Year.

According to Oyetola, if not for Zulum’s strong character and conviction, the enormous security challenges in the Borno State are enough for anyone to run away.

He said: “From the documentary we watched, I can see that the governor in less than two years has done tremendously well.

“And like we all know, the reward for hard work is more work.

“I believe this award will spur him to do more great things for the people of Borno.

“I congratulate you on these honours. You truly deserve them.”

Zulum on his part thanked the Alumni Association for the award, saying it would encourage him to improve on the tempo of service delivery in the State.

The Chairman of the occasion and former Minister of Health, Prof. Isaac Adewole, commended Zulum for carrying on from where his predecessor, Senator Kashim Shettima, left off.

Adewole also commended Oyetola for the prompt payment of workers’ salaries as well as infrastructure development in the state.