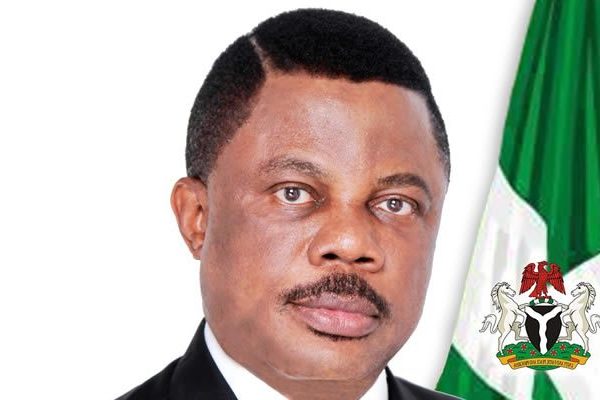 An angry Governor Willie Obiano of Anambra State allegedly lashed out on phone at the President of Ohanaeze Ndigbo, Dr. Nnia Nwodo, on Thursday in reaction to the group’s endorsement of the presidential candidate of the Peoples Democratic Party for next month’s election, Atiku Abubakar.
Obiano, who said he was disappointed that the endorsement came on a day President Muhammadu Buhari commissioned the Mausoleum of Nigeria’s first President, Dr. Nnamdi Azikiwe, in Onitsha, Anambra State, reportedly described the action of Ohanaeze and its president as idiotic.
Nwodo was said to have been shocked by the tone of the governor’s language and wondered why the matter could not be trashed out in a brotherly discussion.
He later sent a text message to the governor saying: “Your Excellency, Gov. Obiano, I was surprised to receive a call from you a few minutes ago in which you said the following words: ‘Nnia, I didn’t know that you were so idiotic.’
“I am shocked that you can be so insolent.
“I am sure that I was not so idiotic when I addressed your State Assembly asking Ndi Anambra to disregard the IPOB boycott of your election nor was I idiotic when I pleaded with the Commander in Chief to restore your security details.
“History will judge who amongst us is idiotic.
“If standing with the popular wish of Ndigbo makes me idiotic, I am happy to be called an idiot.”
The Anambra State Government on Friday formally dissociated itself and the people of the state from the Ohanaeze endorsement of Abubakar.
At a press conference in Agulu on Friday, addressed by the Secretary to the State Government, Prof. Solo Chukwulobelu, it branded the action of Ohanaeze as an act of sabotage.
Chukwulobelu, who stood in for Governor Obiano at the press conference, claimed that Nwodo, whose father served as Minister under Dr. Nnamdi Azikiwe, stabbed him in the back.
He said the endorsement of Abubakar and his running mate, Peter Obi, by Ohanaeze Ndigbo was a slap on Zik’s face in Igboland.
His words: “We’re not part of that decision.
“Our position as far as the presidential election is concerned is to keep neutrality in order not to hurt anybody and the fortunes of the Igbo in national polity.
“From history, the Ohanaeze had failed on four occasions where they endorsed certain presidential candidates.
“Shall we continue that way all the time?
“That purported endorsement by the Ohanaeze was a stab in the back to the Igbo and what we are saying is that we are not part of it.”
Obiano added that Anambra State was mostly angered that all these happened on a day Buhari was in the state to honour Azikiwe.
Obiano said: “We had expected Ohanaeze leaders to participate actively in the commissioning ceremony of the Zik Mausoleum, Onitsha, Anambra State, but they didn’t consider it an honour to be part of that historic occasion.
“We have read bits of the communiqué purportedly issued by the Ohanaeze leadership.
“We regret that they do not reflect the position of the people and Government of Anambra State.
“The position of the Anambra State Government is that Ohaneze should remain a united organisation umbrella for all Ndigbo, and should not take sides with any party.
“There are major leaders in all political parties, including the three major ones in Nigeria, namely, APGA, APC and PDP.
“It is deeply regrettable that the Ohanaeze leadership has chosen to go down a divisive trajectory capable of setting back Igbo unity for several years.”
The Nation.