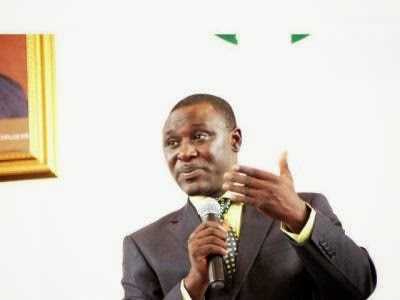 The Plateau State Government and members of the family of the gubernatorial candidate of the Peoples Democratic Party in the April 11, 2015 election, Senator GNS Pwajok, have confirmed his death.
The Governor of Plateau State, Simon Lalong, on behalf of the people of the state expressed his deep grief.
He said the death of Pwajok has robbed Plateau State of the contribution of the senator, whose wealth of political and legislative experience would have added value in the bridge building project on the Plateau as well as the peace and conflict resolution process in the Northern Senatorial District.
Lalong in a statement by the Director of Press and Publications, Emmanuel Nanle, said he holds Pwajok in high esteem on account of his selfless efforts in seeing to the resolution of the several violent conflicts in the Northern Senatorial District, which he represented in the 7th Assembly of the Senate.
The statement said: “”Death has no doubt robbed the state of the robust contribution of the Distinguished Senator to nation building.
“As the state mourns the demise of this astute and vibrant politician, the Governor on behalf of his family and the good people of Plateau commiserate with his family, the Berom Nation and the National Assembly over this loss. He prays for God’s comfort and eternal rest for the soul of the departed Senator.
“Adieu Distinguished Senator G.N.S. Pwajok.”
In a similarly vein, the lawmaker representing Jos South-Jos East Federal Constituency in the House of Representatives, Hon. Edward Pwajok, has expressed shock over the death of Pwajok.
The lawmaker in a statement issued by his Senior Legislative Aide, Hon. Pam Ayuba Adangwom, said the death of Pwajok is a sad moment for Plateau State.
He said: “I received the news with shock and sadness. The whole state has been thrown into mourning as we ponder under the ignominy of this huge loss.
“Painful though, one can only at this moment pray for the peaceful repose of his soul and for the blessings of the Almighty to remain with his family.
“My condolences to the family, the Berom Nation and all the people of Plateau State and indeed Nigeria whom he served meritoriously as a Distinguished Senator of the Federal Republic.
“My brother, friend and colleague, may you rest in peace with The Lord! Amen.”