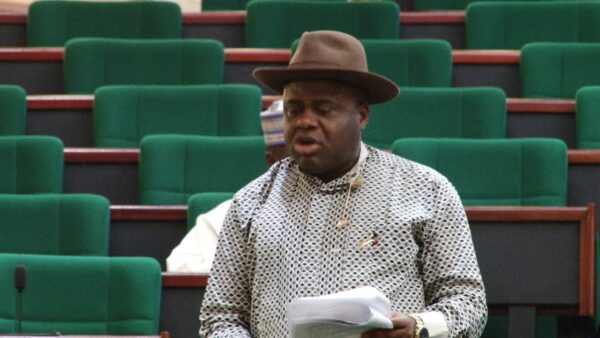 Governor Douye Diri of Bayelsa State has promised useful programmes for the state to rekindle the hope of the people.
The News Agency of Nigeria reports that Diri was sworn in as the fifth governor of the state on February 14 sequel to the February 13 Supreme Court judgment that sacked the erstwhile Governor-elect, David Lyon.
Diri made his administration’s direction known during a statewide broadcast monitored by NAN in Yenagoa.
According to him, victory in a political contest is not an end in itself, but a means to foster peace, stability and development in all spheres.
He emphasised the need to make life more meaningful by creating an enabling environment that would engender economic activities and provide employment opportunities for the teeming youths of the state.
The governor acknowledged outstanding issues arising from the implementation of his predecessor’s policies and expressed his determination to accommodate fresh perspectives for the good of Bayelsa.
Diri said: “We recognise that there are outstanding issues from the implementation of the Restoration Agenda, of which I am a principal proponent and participant.
“As in every family, there will always be reasons to disagree. There may be those who feel that some things could have been done better or differently. As humans, we remain fallible.
“Let us put past grievances behind us. Let us appreciate that governance is a continuum and as the dynamics change, we will accommodate fresh perspectives.
“The important thing is to continue to find reason to agree and work together for the good of Bayelsa.”
According to Diri, the time has come for all Bayelsa people to join hands with his administration to frontally address the myriad of challenges the people face, including poverty and ignorance.
He said such setbacks did not discriminate on the basis of gender, political party, religion and age as no one was immune from their adverse impact.
He said: “This is not the time to cloak ourselves in party colours. The work at hand is far too urgent and important for us to be so distracted.
“Our common challenges including poverty and ignorance, do not discriminate on the basis of gender, party, religion and age.
“No one can be immune from the adverse implication of their impact. Therefore, our response must be calculated, coherent and united.
“We extend a hand of fellowship to all stakeholders and progressive-minded individuals to join hands with us to consolidate the building of the Bayelsa of our dreams; a place we can all be proud to call home.
“We also send a strong message of solidarity to the people of Bayelsa in the Diaspora; the future is brighter.”
Diri expressed concern about the recent attack on the Justices of the Supreme Court, particularly the attack on Justice Mary Peter-Odili, in the discharge of their constitutional functions.
Describing the attack as a desecration of a national institution, the governor saluted the courageous Apex Court justices in their quest to uphold democratic principles.
He also thanked President Muhammadu Buhari for not yielding to the pressure to interfere with the legal process as well as his legal team for putting up a sterling performance.