Gov. Bello to senator: You are a desperate but failed politician 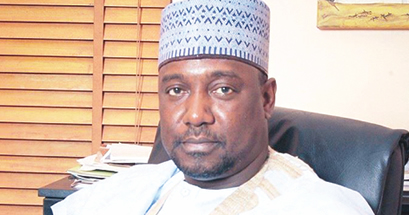 Share
Facebook Twitter LinkedIn Pinterest Email
Barely three days after the representative of Niger East Senatorial District, David Umaru, lambasted the Governor of Niger State, Abubakar Sani Bello, on his endorsement for 2019, the Governor on Sunday described the lawmaker as a failed politician.
The governor told journalists while reacting to the senator’s position on his endorsement for a second term, that the lawmaker has never seen anything good in any leadership or government.
It should be recalled that Umaru had disclosed that the governor does not deserve a second term in office, describing his performance as abysmal since he emerged on the platform of the All Progressives Congress.
According to Umaru: “The governor’s performance does not justify the rush for second term or any form of endorsement.”
In a reaction to the lawmaker’s stance, the governor, who was represented by his Deputy, Alhaji Ahmad Mohammed Ketso, said: “David Umaru is a desperate and failed politician.
“Now that the political climate is gathering momentum, some desperate politicians like David Umaru are heating up the polity.
“Since 1999, Umaru has not recognised or seen any good in any leadership.
“He has lost touch with his people in the Niger East Senatorial District and he is looking for an escape route.”
Governor Bello added that the lawmaker has been a desperate politician who cannot sustain any political structure.
He said: “As a lawmaker, he is supposed to respect the law; he has not respected or recognised any government.”
While commenting on his endorsement, Bello said the APC has the prerogative to endorse any performing candidate and has done so, so as to sustain the zoning arrangement in the state.
Accordingly, he said: “Umaru has continued to arrogate himself as the only qualified person; he wants the governorship candidate to come from zone A and a deputy from zone B.
“If there is anyone who wants to become a governor because of the zoning arrangement he or she must come from zone C.
“We will not be distracted by anyone who calls or sees himself as the god of Niger.”
The governor further warned Senator Umaru has been trying to use non-political groups and associations to be relevant, adding that he has also tried to incite people by introducing ethnic cleansing.
He said: “I want to tell all associations in the state that David Umaru is not reliable, any attempt to go with him will amount to compromising.
“We are ready to work and support any group who is ready to bring development to the state.”
Speaking in his capacity, Ketso said: “We are not panicking.
“I taught David Umaru how to be a politician.
“We were together in the All Nigeria Peoples Party in 2007.
“He has never sustained any political structure. I have known him for the several years and indeed, since 1999, he has not recognised any government.”
Ketso also disclosed that the APC in Niger State does not have any problem and so may not need the Asiwaju Bola Ahmed Tinubu reconciliation committee, adding: “It is David Umaru who has problems with himself.”
Abubakar Sani Bello Ahmad Mohammed Ketso David Umaru Niger East Senatorial Dsitrict Niger State
Share. Facebook Twitter Pinterest LinkedIn Tumblr Email