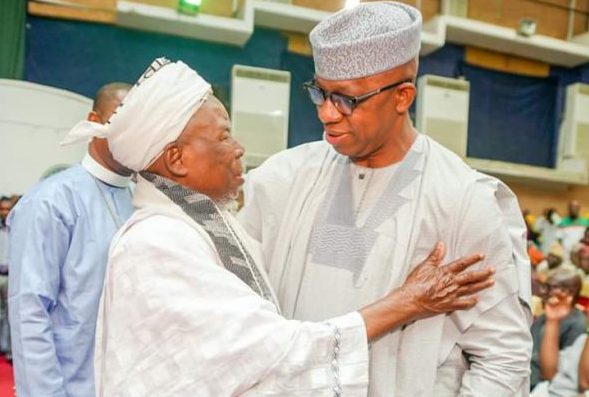 Governor Dapo Abiodun of Ogun State on Tuesday mourned the death of the state’s President, League of Imams and Alfas and Chief Imam of Egbaland, Alhaji Liadi Orunsolu.

Abiodun, in a statement he personally signed and made available to newsmen in Abeokuta, sent his condolences to the people of Egbaland in particular, the state and the Muslim Ummah in general.

The Governor described Orunsolu’s death as a great loss to the state, noting that the late Chief Imam spent his days praying and teaching values and precepts of the Quran.

He said: “Baba Orunsolu lived a worthy and highly commendable life that will be remembered by posterity.

“I urge all Muslims in the state to immortalise him by living the virtues of love, peace and good neighbourliness that he lived and propagated.”

Abiodun added that the death of the late cleric marked the end of an era and a great personal loss.

He said: “He always spoke truth to power and was a huge pillar and supporter of our administration.

“We were like father and son and he never related with me as a governor.

“The fact that Chief Imam died after the successful completion the 2020 Ramadan fasting and Eid celebration at a grand old age of 99 indicates Allah’s pleasure with him.

“He was unpretentious about what he preached and practised.

“We owe him a huge debt of gratitude for his forthrightness.

“I pray that Allah would grant the soul of the departed good rest in Aljannah Firdaus and comfort his family.”

The News Agency of Nigeria reports that the Chief Imam died in the early hours of Tuesday at the age of 99.