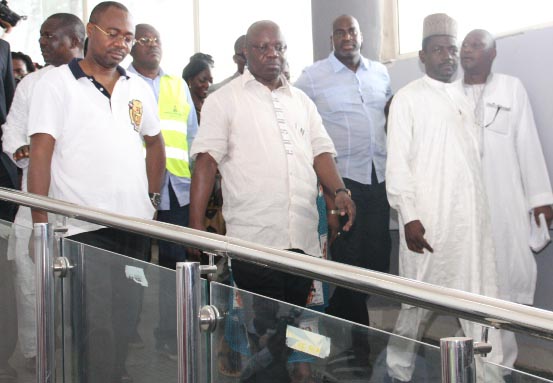 The Delta State Governor, Dr. Emmanuel Uduaghan, has commended President Goodluck Jonathan for the approval of the Good Governance Tour, explaining that it shows that the President is transparent in his dealings and wants to be assessed accordingly.
Speaking on Thursday in Asaba, the Delta State capital, when the Good Governance Tour Team visited the state, Uduaghan said that creation of employment was the main focus of the state’s policy of “Delta beyond oil”.
He explained that the state government was putting in place infrastructural development projects, which would sustain the economy.
He said: “I want to appreciate what this team is doing.
“We will continue to support this programme.
“I commend Mr. President for approving this programme.
“It shows that the President is transparent in his dealings and wants to be assessed.
“The media should be specific in their reporting, especially in negative issues.
“They should learn to appreciate what we have and change this attitude.
“As a state government, we are doing our best to build a state beyond oil through our three-point agenda.
“Our ultimate goal is that of job creation and I believe that when our youths are engaged, they will have no time to be involved in criminal activities.”
Uduaghan, assured the Minister of Information, Labaran Maku, and his tour team of the state government’s continuous support to the various law enforcement agencies to deal with issues of kidnapping and piracy.
The governor explained that Delta State was peaceful and safe for anyone to live in and move around because his administration has been committed to tackling the issue of security squarely.
Governor Uduaghan informed the team that there were some intangible programmes being carried out by the state government.
Speaking further, he noted that the state has free maternal and child care delivery in the health sector, pays NECO and WAEC fees for SS3 students and that there was scholarship schemes for Delta State students at all levels of education.
His words: “There are areas people do not appreciate that this administration has spent a lot of money on.
“There are things you will not see on ground as you move round the state but are important and are part of our developmental programmes.
“In the health sector, we have free maternal care for pregnant women and free medical care for children from 0-5 years.
“In the education sector, we offer scholarship schemes for Deltans at all educational levels and pay for external examinations for our SS3 students in public schools.”
Governor Uduaghan said his administration was In support of the Good Governance Tour as it would help showcase the developmental strides going on in the country to the outside world and improve the image of Nigeria.
He admonished the media to appreciate the democratic gains in the country by positively portraying the developmental strides all over the country and stop making negative issues frontline stories.
Speaking further, he advised the team to brace up to the challenges they would encounter in the course of the tour and accept constructive criticism cheerfully.
In his address, Maku informed the governor that the Good Governance Tour was not a Federal Government programme but a national programme put up to help promote the country’s democracy.
He explained that it was a programme supported by the 36 state governors and Federal Government to showcase the progress made so far in the 13 years of democracy, adding that the tour has nothing to do with partisan politics.
According to him: “This programme is not a Federal Government programme.
“It is a programme supported by the 36 state governors after extensive consultations and deliberations.
“It is to showcase the progress made so far in different states to promote democracy.
“We are putting partisan politics aside.
“We will not be partisan.
“We have sworn to be transparent and neutral in our assessments.”
Maku also commended Governor Uduaghan for the peace enjoyed in the state, stressing that normalcy had returned to Delta State after a long period of crisis, adding: “Delta is peaceful now.
“Normalcy has returned to the state and this has given rise to the developmental strides we are witnessing today.”