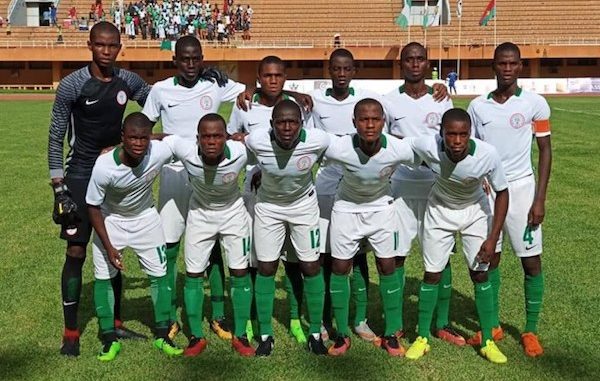 Former World Champions, Nigeria’s Golden Eaglets, will on Thursday know their group opponents ahead of the forthcoming FIFA U-17 World Cup in Brazil.
The draw for the competition is slated to take place at the Home of FIFA in Zurich, Switzerland.
The Manu Garba-led team alongside Angola, Cameroon and Senegal would represent Africa at the competition.
Senegal’s qualification was confirmed by the CAF Executive Committee following the decision taken by CAF’s disciplinary body to disqualify Guinea.
Hosts Brazil, who are three-time winners of the tournament, will be preassigned to position A1 in the draw and will therefore feature in the opening match.
“With their great passion for football and vast experience of organising world-class sporting events, I am convinced that Brazil and the Brazilian Football Association (CBF) will be fantastic hosts of this year’s FIFA U-17 World Cup. I believe that the four selected stadiums offer the right size and facilities for this competition, and we are very excited to bring this thrilling tournament to venues that have never hosted a FIFA event before. Thanks to the excellent cooperation and contribution of the CBF and Local Organising Committee, I am sure that we will be able to provide all teams, fans and officials with the best possible conditions,” said FIFA Chief Tournaments & Events Officer Colin Smith.
The competition has previously served as a springboard for an array of world stars such as Gianluigi Buffon, Francesco Totti, Ronaldinho, Xavi, Toni Kroos, Neymar, Nwankwo Kanu and Wilson Oruma.
The successors to current FIFA U-17 World Cup champions England will be decided on November 17, also at the Estádio Bezerrão.