God has asked me to run for Presidency — Bakare 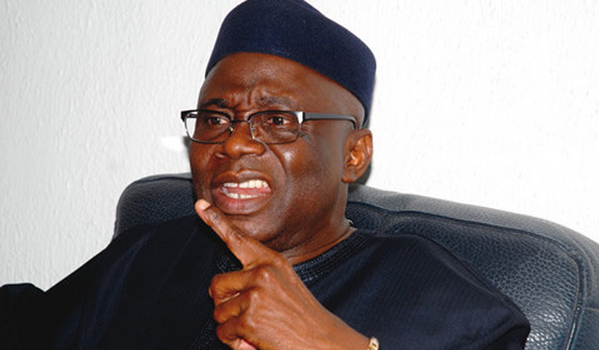 The Serving Overseer of the Latter Rain Assembly, Pastor Tunde Bakare, has said God has told him not to end his political career as he had earlier contemplated.
Specifically, Bakare, who contested as the vice-presidential candidate on the platform of the defunct Congress for Progressive Change in the 2011 presidential election, said God told him to run for the Presidency.
The Lagos-based cleric spoke in the early hours of Monday during the watch night service at the Latter Rain Assembly in Ogba area of Lagos.
Giving a rundown of the 12 major things he said God had revealed to him would happen in 2018, Bakare explained that God had not told him when the “appointed time” to run for the presidency would be.
He said: “This twelfth one is a difficult one for me. It may draw excitement or condemnation. I have tried my best to keep it (to myself) but the Holy Spirit will not allow me to do so.
“In my study around 4am on Sunday morning, God told me ‘you cannot bring your political career to a close; there is still more to do. Run for the Presidency. I will do it at the appointed time.”
Bakare declared that he was unfazed by the daunting task that his aspiration might pose, expressing confidence that once the Lord had spoken, it was left for God to perform it.
He stated: “Joseph (in the Bible) did not contest an election; yet, he became the prime minister of Egypt. Why must I worry myself about where to get the resources for the task? Your own duty in this assignment is to pray along with me. When it is the appointed time, He (God) will do it. When He tells me the time, you will hear about it.”
Bakare added that most of the “political juggernauts” in the country would fall “at the feet of women in 2018”.
Though he did not mention names, the cleric said some of those seen at the moment as among the most powerful in Nigeria’s political space, would be “replaced”.
He said: “In 1998, I told you that I saw your President dying between two women. Did it happen? I’m telling you again: some of these political juggernauts will fall at the feet of women and you will see it happen.”
The pastor declared that 2018 would be a year when women would break barriers in most fields of human endeavours both in Nigeria and globally.
He explained that women would be in the forefront of most policy making decisions while also dictating the pace in the boardroom.
The PUNCH.