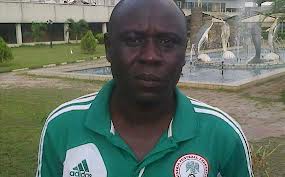 The die is cast for the Golden Eaglets as they battle for a semi-final slot at the ongoing Morocco 2013 CAN-U-17 with the crunch game against Congo Brazzaville at the Grande Stade de Marrakech on Saturday.
The match is fixed for 4pm Nigerian time.
Head coach, Manu Garba, has told his wards in clear terms: go and conquer Congo!
The Eaglets are second on the Group B log with three points behind Cote d’Ivoire which has four.
Congo and Ghana are both on one point each, which makes the group delicately balanced with all the four teams having a realistic chance of getting a berth to the semis.
Nigeria need an outright win to be double sure of qualification for the semi-finals and a ticket to the 2013 World Cup in the UAE, irrespective of the outcome of the other Group B match between Ghana and Cote d’Ivoire.
The two matches would be played simultaneously.
Garba said: “We don’t want to start doing any mathematics or depending on the result of the other match between Cote d’Ivoire and Ghana to know if we are through.
“The players have been told what is required and by the grace of God, we need to win our game and we are through to the next stage.”
The team rounded off their training ahead of the game at the training pitch of the Grande Stade de Marrakech full of high hopes.
Team captain, Musa Mohammed, is upbeat about the chances of the team, saying they are wiser now after the shock 0-1 loss to Cote d’Ivoire, which now leaves their qualification ticket for the 2013 Under-17 World Cup hanging in the balance.
Mohammed said: “We are ready for business and we would as usual give more than 100 per cent. We are motivated for this match and insha Allah, we would qualify for the World Cup.”