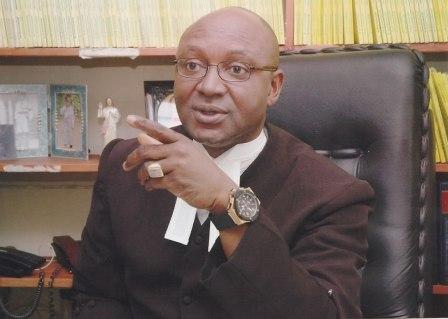 Lagos State-based human rights activist, Chief Gabriel Giwa-Amu, has praised the Edo State Governor, Comrade Adams Oshiomole, for not using the state’s funds for any perfidious venture, including the Good Governance Tour that the Minister of Information, Labaran Maku, has embarked upon with a retinue of aides and journalists numbering over 120.
In an interview with The Eagle Online, Giwa-Amu said he agrees “wholly and completely and exhaustively” with the position of Oshiomole, stressing that the position of the governor can best be summarized as a refusal to engage in “perfidious, irresponsible and wasteful spending.”
He believes Maku should “find good work for his hands instead of going on a frolic of his own and wasteful spending of government funds.”
Giwa-Amu said the way Maku is running, he will end up being investigated by the police for soliciting and seeking to obtain public fund for a purpose that is not in tandem with good governance.
Speaking further Giwa-Amu urge Maku to visit prison nationwide using the budget of his own ministry instead of soliciting for fund in pursuit of a wasteful enterprise.
In a related development, the Chairman of Edo Consultative Forum, Gilbert Oboh, wants Maku to tell Nigerians which of the state he had visited and had the courage to indict the governor where there are glaring wasteful spending of government funds in the face of decaying and abandoned projects that are visible for all to see.
Oboh said Maku has given pass mark to all states and praises to the high heavens to those he described as looters of the people’s commonwealth.
He enjoined President Goodluck Ebele Jonathan to engage Maku in some more meaningful jobs.
The President, Alimosho Media Forum, Sunny Onyewosa, expressed joy at the bravery of Oshiomhole.
Onyewosa said that for once someone had the courage tell a government official to stop playing on the sensibilities of the Nigerian people.
He said: “I was even most disturbed by the very lame defence that the minister is putting up because to me he would have followed what I will term his loose defence by reeling out to us what the tour round the country has so far achieved.
“They should hold their faces in shame.
“With this development, it is glaring that this government takes delight in embarking on some mindless ventures.”