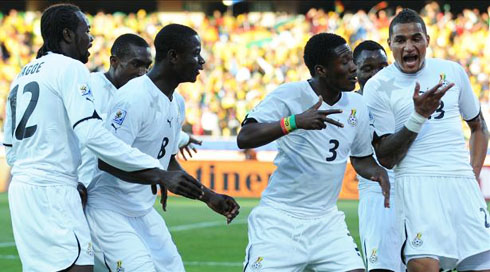 Miroslav Klose came off the bench to rescue a point for Germany in a thrilling 2-2 draw with Ghana in Fortaleza on Saturday.
Second-half goals from Andre Ayew and Asamoah Gyan had given the African nation a slender lead after Mario Gotze opened the scoring.
However, the evergreen Klose was on hand to equalise within minutes of coming on with a typical poachers goal to move level with Brazil legend, Ronaldo, as the competition’s most prolific marksman of all time with 15 World Cup goals.
Kwesi Appiah’s side finished the half in the ascendency as Sulley Muntari’s fiercely-struck shot tested Neuer, but the European outfit survived and took the lead within minutes of the restart.
Muller, who bagged a hat-trick in the 4-0 win over Portugal in the Group G opener on Monday, turned provider to set up Gotze with an easy header on 51 minutes.
Falling behind only served to spark Ghana into life, as Appiah’s men flipped the game on its head shortly after.
Ayew scored his second in as many games, providing an immediate riposte with a glancing header, before Gyan fired past Neuer nine minutes later to give the Black Stars a narrow advantage.
Low replaced goalscorer Gotze with Klose and within minutes, the 36-year-old wriggled free from his marker to poke home from a corner.
Die Mannschaft finished off the contest the better of both sides, and Klose fired agonisingly wide of the mark from a good position late on, but it came as close as they would come to finding a winner and Ghana held on for a point.
Meanwhile, Klose equalled Brazillian legend, Ronaldo’s 15-goal mark at the World Cup.