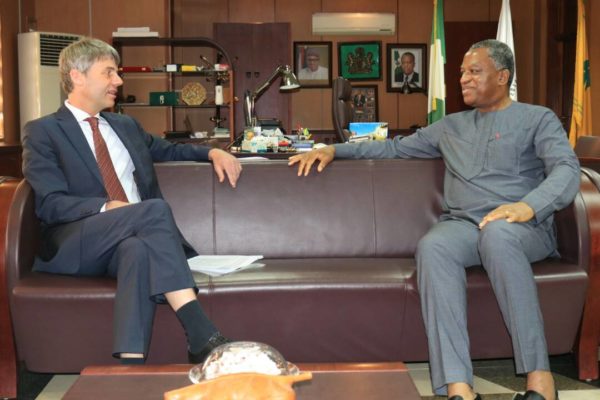 Germany has proposed a new process that will facilitate the smooth repatriation of over 30,000 illegal Nigerian migrants back to the country.
The Minister of Foreign Affairs, Geoffrey Onyeama, said this when he received the Security Adviser to the President of Germany, Dr. Jan Hecker, and his team in Abuja.
The new proposal, according to Onyeama, is predicated on perceived failures and slow pace of the current system of repatriation.
This, he said, involved the participation of Nigerian embassies and consulate and the German immigration office.
He said: “They don’t have enough faith and confidence in the process that we have at the moment for the repatriation process.
”Some of the delays they believed are with the mission and consulate in Germany.
“They want to propose a completely new process of repatriation, known as Return and Re-admission.”
Onyeama said in the last two years, only about 200 Nigerians had returned to the country out of about 30,000.
“Germans were not happy that the system we have in place at the moment is certainly not working to their satisfaction,” he said.
According to him, the new process essentially entails that once all legal processes have been exhausted, Nigeria should trust them (Germany) to make the right decision on who should be repatriated.
He added that once the decision was taken, Germany would bring the affected persons to Nigeria without the involvement of Nigeria’s mission in Germany.
Onyeama said: “They will bring them here to Nigeria and say we have gone through a process in Germany, these people are your nationals, they have exhausted all the legal processes, please take them.
“And it will be here on Nigeria territory that any possibility will then exist to say maybe that one is not or this one is not.”
Onyeama, while describing the proposed process as a complete transformation of the current process, noted that Germany aside from issuing travel documents to those to be repatriated, would also be responsible for their travels.
However, for the new process to come into being, Nigeria would have to agree and carry out some changes in her laws.
Earlier, Jan Hecker said he was in Nigeria to see how both countries could intensify their bilateral relations and achieve good result, particularly on migration.
He was accompanied on the visit by the German Ambassador to Nigeria, Bernhard Schlagheck and other officials.