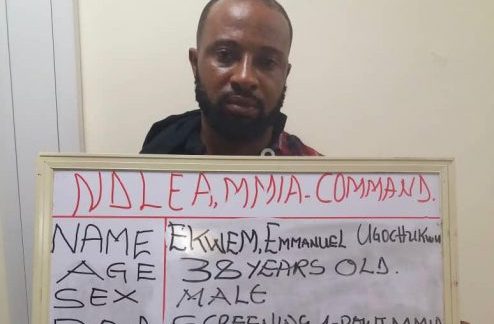 This comes on the heels of his arrest by the National Drug Law Enforcement Agency with cannabis on his way to Kenya.

Ekwem was caught at the Murtala Muhammed International Airport, Lagos as he made to leave for a crusade in Kenya via Ethiopian Airlines.

In the video now viral video, the General Overseer whose church headquarters is located in Isuaniocha, Mgbakwu Road, Awka, Awka North LGA, Anambra State, could be seen performing miracles on a crowd fell during the service.

He was seen waving his hands and people started falling down.

He was also heard asking the choir members if they needed miracles while he moved from place to place performing “wonders”.

In a statement by its spokesman, Femi Babafemi, titled: “Church General Overseer arrested with drugs at Lagos airport,” the NDLEA said when the drugs were tested, the 54 sticks proved positive to cannabis.

According to the statement, the clergyman confessed during a preliminary interview that he packed that quantity of illicit substance on his body to use during his three weeks crusade in Kenya.