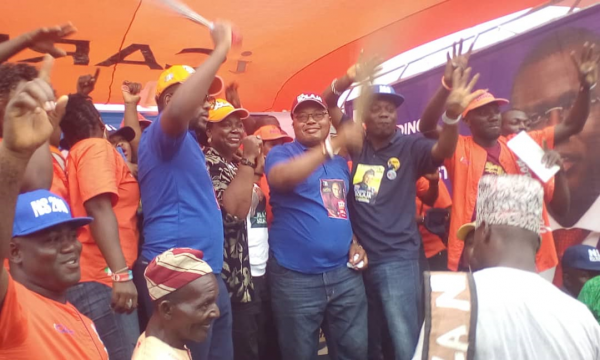 Oba Ajibade Bakare-Agoro, the Ranodu of Imota, Ikorodu has thrown his weight behind the re-election bid of Nurudeen Solaja, to represent Ikorodu Constituency II in the Lagos State House of Assembly for the second term.
The royal father gave the support when he played host to Solaja and APC leaders in his palace on Thursday in Imota.
The News Agency of Nigeria reports that the candidate and party leaders went to the palace for royal blessings and support before the flag-off of his reelection campaign.
Bakare-Agoro prayed for Solaja that he would succeed in the polls, having brought dividends of democracy to the people of the area in his first term.
He said: “Nurudeen Solaja is a presentable candidate and he has done marvelously well, that is why we are supporting his cause.
“We the people of Imota are very much in support of his candidacy.
“I am appealing to the electorate in Ikorodu Constituency II to kindly support the candidacy of Nurudeen Solaja.
“He has performed very well and I believe this second term will be more honourable than the first one.
“I can assure him of my support and the support of our people because APC has done very well.”
The traditional ruler said that Solaja had midwived so many projects in the area, such as boreholes, schools, scholarships, empowerments among others.
He urged the youths to be peaceful during the elections and work for the development of the area.
Also speaking at the flag-off, the Baba Oba of Egbin Kingdom, Ikorodu, Chief Jamiu Adisa, said that the royal fathers were supporting Solaja for his good works to the people.
Adisa, who noted that the constituency was united about the candidacy of Solaja, said the royal institution was supporting all the candidates of the APC in the state.
Highlighting the numerous ‘good works’ of the candidate, he urged the people to get their PVCs and vote Solaja for another term.
He urged the state government to pay the entitlements of those who had been crowned but had yet to be paid, adding that most palaces also needed refurbishing.
Rotimi Olowo, member representing Somolu Constituency I in the Lagos Assembly, who came to solidarise with Solaja, said that the lawmaker had proven his worth in the House in his first term.
Olowo, who is also seeking return to the House for the fourth term, said that Solaja had done so much for the people of the constituency such that he should be returned.
Another lawmaker on solidarity mission, Setonji David, representing Badagry Constituency II in the House, said that Solaja had passion for his constituents.
David, who is also seeking reelection for second term in the House, expressed confidence that the APC would win in Lagos State and the presidential election.
Speaking at the flag off, Solaja said that his passion and commitment was to represent the constituency well and empower his people.
The lawmaker, who urged the residents to vote for the APC, said that the need to further serve his people was why he wanted to go to the Assembly for second term.
He said: “We have empowered the youths in the area of computer training, we gave out JAMB and GCE forms since we came on board in 2015.
“We also empowered the artisans by giving them tools such as grinding machines, dryers, fishnets for fishermen and coolers as well as drinks for the people to start selling.
“If I could do this during my first term, then they should expect more in my second term.”
He urged the INEC to conduct a free and fair election, which he said they had been doing.
Also, Jimi Benson, member representing Ikorodu Federal Constituency in the House of Representatives, advised the people to vote for President Muhammadu Buhari and all APC candidates in the state.