Gbajabiamila to FCC Chair: Don’t play politics with your office 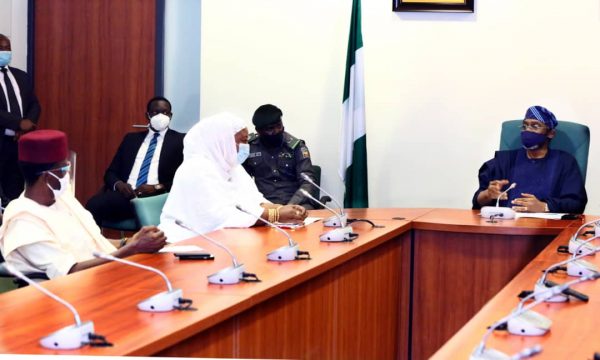 The Speaker of the House of Representatives, Rep. Femi Gbajabiamila, has urged the Chairman of the Federal Character Commission, Dr. Muheeba Farida Dankaka, to be firm and not to play politics with her office.

Gbajabiamila said though her being in office could be termed a political appointment, it was imperative for the chairman to stay off politics in all her dealings, adding that it is a very “sensitive office”.

He said the office of the chairman and the entire commission has the “imprimatur of the constitution,” hence her job is constitutional.

Speaking when he hosted the chairman of the FCC and some of her commissioners during a courtesy call in his office on Tuesday, Gbajabiamila said the commission and other agencies of government are welcome to the House for symbiotic relationships.

He said: “Let me say from the onset that this House is an open house.

“We don’t just talk the talk when we say it’s the people’s house; we actually work that talk, and we mean what we say.

“This is your first visit, but we may have other engagements after this because we need to have a symbiotic relationship between your good selves and the House of Representatives.

“It is only when we have that that your work can be made easier.

“The reason why I emphasised that is because you hold a very sensitive office in the sense that it is one of those offices that have constitutional imprimatur.

“You derive your powers from the constitution.

“It is stated there very clearly.

“We all know what federal character means, and we all know that in Nigeria today, one of the major issues is how balanced our people are represented.

“This is what the House of Representatives is all about.

“Even though yours can be considered as a political appointment, but you must not play politics with this job.

“It’s a very important one.

“It’s one of those commissions that many people don’t realise its significance and its importance.

“So, I congratulate you and the rest of the commissioners.

“I hope that your time in office will be one that will further unify the various tendencies in this country and will show the geographical spread of this place we call Nigeria.”

Earlier, Dankaka had said they were in the Speaker’s office to introduce themselves to him, having being appointed recently.

She assured that she and all the commissioners are committed and ready to serve in their various capacities diligently and patriotically, saying they needed the support of the House to succeed.