by Hassan Muaz
in Life and Style
5 min read
0

The Speaker of the House of Representatives, Rep. Femi Gbajabiamila, on Sunday met with members of the Abuja Newspapers Distributors Association and Newspapers Vendors Association in Abuja to condole with them over the death of their colleague, Ifeanyi Okereke.

Gbajabiamila, who visited the Abuja newspapers distribution centre at Area 1 in Abuja, said Okereke, who died from a bullet fired by one of the security aides attached to his convoy, would get justice. 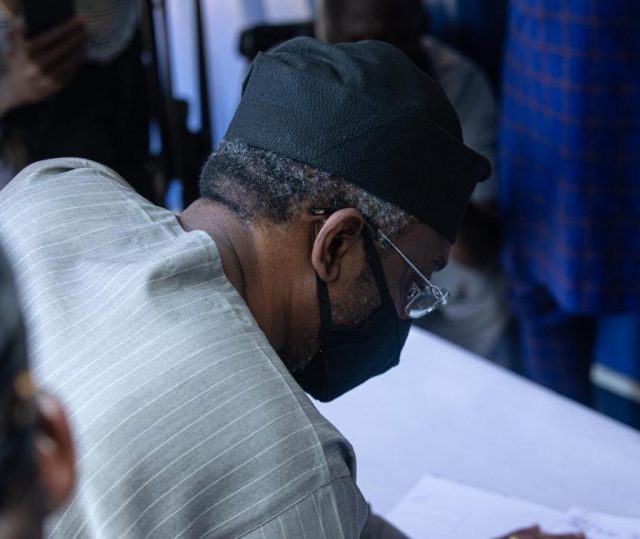 He said: “The arc of the moral universe is long, but it always bends towards justice.”

The Speaker, full of grief over the incident, said the House would upon its resumption of plenary on Tuesday honour the late Okereke and invited the leaders of the two associations to be part of the event to be held on the floor of the House.

He said: “Let me address you not as the Speaker but as Femi Gbajabiamila, a citizen of the Federal Republic of Nigeria, who has been caught unawares in the middle of this unfortunate incident.

“Many of you that have been following me from the beginning know that championing the cause of the masses has been my life work as a legislator.

“I have been a champion of the common man and therefore the irony of this is not lost on me and many of us.

“However, I will continue to do this as long as I live.

“This is a very difficult time for me.

“Like many have said, you guys have been my friends for years.

“I have no idea and I don’t know why you guys have always taken to me over the years, including campaigning for me in the streets of Abuja during the speakership election.

“You’ve always been there for me.

“As you were selling your papers, you were also selling me.

“That’s why each time I pass you guys, I stop to say hi.

“Some people said why did I stop in the middle of the road?

“But as we were moving, the lights changed to red, which meant to stop.

“We could have moved on, but I have always instructed my convoy to be law abiding.

“So we stopped and my friends, as usual, besieged the vehicle, shouting and were jubilant.

“Immediately I heard the gunshot, I screamed and said why did they do that?

“At that time I thought it was just a shot into the air.

“As we moved on, I asked that they should park the car.

“It’s against security training as they made me realise, but I insisted and they parked.

“They said everything was okay.

“Indeed some other road users behind us did say everything was okay.

“It was later that night that I got the full gist of what had happened.

“I want to commiserate with you over what happened.”

The Speaker said the security operative responsible for the shooting had been handed over to the Department of State Services and investigation into the shooting and its circumstances had started.

Gbajabiamila said he had visited the family of the late Okereke at the Kwata area of Madalla-Suleja on Saturday, where he met with his wife and children. 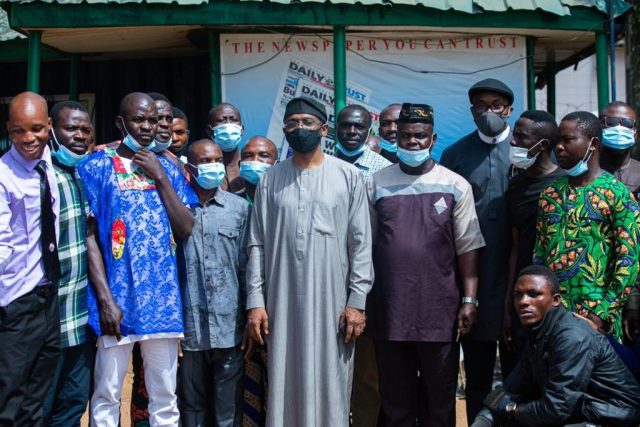 He said: “Those children have now become my children.

“I have made commitments to the family to train them until they become adults.

“I have instructed the lawyers in my office to immediately set up a trust fund for them until  adulthood.

“The incident has touched me in no small measure and in ways difficult for anyone to understand.

“I am a man of peace and not violence.”

As part of the mourning period, the Speaker said he had cancelled all his engagements “because I’m indeed mourning, and I can’t be mourning and be celebrating or attending joyous occasions or functions at the same time.

“We all talked about justice, and I assure you we will follow due process.

“Justice, in whatever form it is, will prevail.

“That’s what we can do for now.

“There’s sitting on Tuesday, and I’m inviting the Executives of the two associations, and maybe some few members, to come over where we will be honouring Ifeanyi.

“We have a lot of things on Tuesday, but we will honour him.

“I feel your pain.

“Your pain is my pain.

“My pain pales into insignificance when compared to what you or the family may be feeling at this time.

“May his soul rest in peace.

“May God grant him eternal rest.

“May the death of Ifeanyi be the beginning of good things for the vendors.

“I have heard your requests, and I assure you that those requests would be handled.

“Ifeanyi’s death won’t be in vain.

“May a lot of good come out of this unfortunate incident.

“I thank you for your very kind and generous words regarding my person.

“I thank you for receiving us.

|It’s unfortunate that we’re meeting under this circumstance, but I assure you that this won’t be the last.”

On his part, the spokesman of the House, Rep. Benjamin Kalu, said it was a sad moment, commending the vendors for the maturity with which they have handled the matter so far.

Kalu said: “Out of concern, the Speaker insisted that a foundation or a trust fund be put in place for that family.

“He has also promised to grow the wife’s business or set her up in business if she doesn’t have one.

“If it were another person, he would have sent his aides to go and see the family.

“But he suspended all his national assignments to go and see the family.

“He said that one life is more important than anything else.”

Kalu suggested that November 19, which was the day Okereke died, be set aside every year to celebrate vendors.

Speaking, the President of ANDA, Benji Obute, commended the Speaker for his humility and thanked him for showing uncommon concern over the incident.

Obute said: I want to use this forum to appreciate Mr. Speaker for the uncommon love he displayed to the newspaper vendors.

“The vendors and distributors have been having robust relationship with the National Assembly, which led us to have a special publication commending the National Assembly last year December on the qualitative legislation you are doing, especially on the timely passage of the 2020 Budget.

“We have stated our request, part of which is the scholarship, compensation and the welfare of the family.

“We want our late brother and colleague to be immortalised.

“We’ll give you the architectural design of a tent to be built here and named after him.

“What we want is justice to be done.

“The vendors are traumatised and cannot do their business at the Federal Secretariat again.

“Whatever kind gesture that you can extend to them will be appreciated.

“We are not blaming you for what happened.

“We blame the security man that did the shooting.”

Also, the Chairman of NVAA, Etim Iwara, said the late Okereke was a dedicated and loyal member of their association, noting that justice must be done on his death.

Iwara said: “We appreciate the Speaker for the steps he has taken, including the visit to late Elechi’s family yesterday (Saturday).

“We are happy that the Speaker has made promises to address the issue and assist the family.”

US congresswoman says ‘drawing up’ articles to impeach Trump

Why I want to go to House of Reps – Veteran journalist

Most okada riders in Oyo are spying for bandits, foreign kidnappers – Amotekun