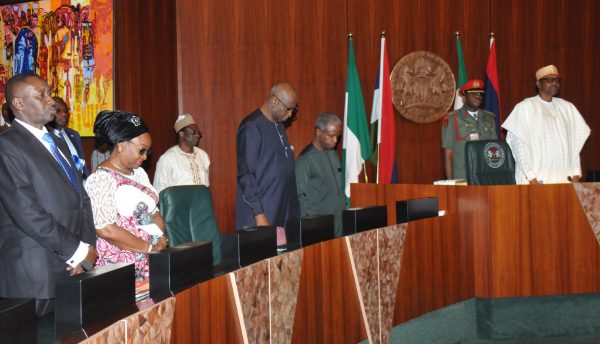 The Federal Executive Council has approved the conversion of natural gas to methanol in order to address the environmental challenge caused by gas flaring in the country.
The Minister of Science and Technology, Dr Ogbonnaya Onu, briefed State House correspondents after the Federal Executive Council meeting presided over by Vice President, Yemi Osinbajo on Wednesday at the Presidential Villa, Abuja.
He said the gas flaring, which had constituted a problem over the years, would be addressed by converting natural gas to methanol which could be used in many sectors on the economy.
“The Federal Ministry of Science and Technology presented a memo to council that requires the utilisation of Methanol in our economy.
“The problem that we have in the Niger Delta where our natural gas is flared and it has created lots of problems;  environmental problems; and also problems for fellow Nigerians living around those areas where the gas is continuously flared.
“It is of major concern to this administration and one way to help us to completely solve this problem of gas flaring is to convert the natural gas into Methanol.
“Methanol is a liquid that finds use in virtually all sectors of the economy; you can use methanol for transportation; all those racing cars that they put M85, M100, essentially, that ‘M’ is methanol and then 15 per cent gasoline but for ordinary use, normally the blending will be 15 per cent of methanol so that you don’t need to make any adjustments to your vehicle.
“Then, also, methanol can be used to replace diesel for all these trucks that we find on our high ways because methanol is cheaper and more environmentally friendly.
“So that all the problems associated with the use of diesel can be solved by the use of methanol.’’
According to Onu, women and people in the rural areas can use methanol for cooking so that it will replace kerosene.
He said that when cooking was done with kerosene, it resulted to soot which darkened the pot as well as creating health problems for the users.
The minister said that methanol did not have soot as it was very clean, safe and cheap.
“It is one way that we utilise our gas in our rural areas and it is going to help us in this problem of deforestation; because today, we are losing many of our forests and trees because we are using them for domestic energy use; so methanol will do this.
“Methanol is also useful in generating electricity power plant; many power plants currently use diesel and all that; methanol will be a replacement.
“Once this is implemented, it will help us to create new businesses particularly, micro and small businesses that have the potential to grow into bigger ones and it will help in the creation of jobs,” he said.
Onu said that the conversion of natural to methanol would also help in wealth creation as well as in fighting poverty.