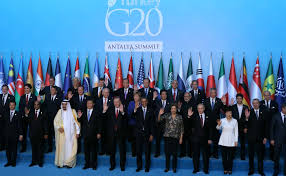 Share
Facebook Twitter LinkedIn Pinterest Email
Some Nigerians have appealed to world leaders attending the forthcoming G20 summit in China to consider the development of Africa as a priority in the interest of global peace.
They made the appeal in separate interviews with the News Agency of Nigeria in Abuja on Saturday.
Sunday Adebayo, who runs a business centre in Abuja, said: }Africa has been left behind for too long.”
Adebayo, however, attributed some of the current global challenges to the long time neglect of Africa.
He suggested that the world leaders should come together and place Africa in the front burner, adding that the world stood to gain from the development of Africa.
Felicia Agunbiade, a public analyst, who also spoke with NAN, maintained that “the G20 summit presents another opportunity for the world leaders to correct the mistake of the past”.
According to Agunbiade, the global peace will continue to be threatened if a particular continent is not at par with others.
She, however, wondered why Africa should suffer under development for this long, and
blamed African leaders for not meeting up with the expectations of Africans.
Agunbiade said: “I want to say that African leaders should share major part of the blame for not doing enough to develop Africa.”
On current economic challenges in Nigeria, Agubiade said it should addressed because if it was not adequately checked, it would spread to some African countries.
She held that most African leaders have failed the continent, adding that diseases, hunger, war, insurgency and other challenges in Africa toady could be traced to poor leadership.
The public analyst also urged the G20 members to take deliberate action with a view to addressing some of these challenges facing Africa in the interest of global peace.
Habiba Audu, who also spoke with NAN, believes that Africa deserves more than what it was getting now.
Audu identified previous colonial experience of most African countries as a major setback for Africa.
She said: “I believe our colonial experiences also contributed to our under development.”
NAN recalls that G20 summit, which was founded in 1999, began as a forum for finance ministers and central bank governors who met once a year to discuss international economic issues.
The summit, which comprises of 20 countries, has only South Africa as a member from Africa.
NAN also reports that this year’s summit will take place in China from September 4 to 5.
G20 summit
Share. Facebook Twitter Pinterest LinkedIn Tumblr Email