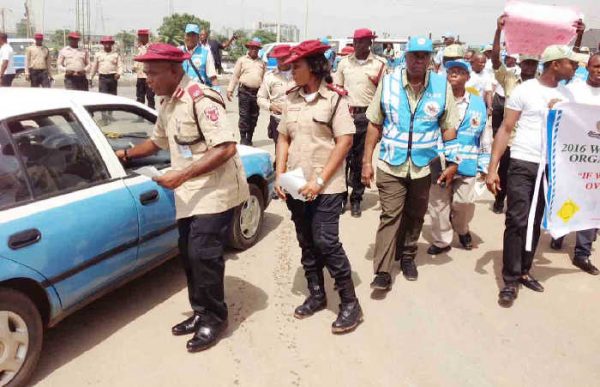 The Federal Road Safety Corps on Thursday urged drivers of Police and Army escort vehicles to stop the willful flouting of traffic rules on the Benin-Ore Expressway.
Philip Ozonnandi, the Unit Commander in Ore, Ondo State, gave the advice in an interview with the News Agency of Nigeria in Ore.
Ozonnandi said the frequency at which escort drivers of the two security outfits drove against traffic had become worrisome.
The FRSC also expressed worries over the excessive speed of the drivers, adding that such recklessness continued to endanger the lives of other road users.
He said the trend had attracted a development where other motorists join those escort vehicles to escape the corps routine checks.
Ozonnandi also said the command required towing and ambulance vehicles to effectively handle emergency situations on the highways.
He said: “We are daily confronted with challenges of evacuating broken-down vehicles from the roads but insufficient towing vans retards our efficiency to prevent gridlocks caused by broken-down vehicles.”
He, therefore, urged all road users to always obey traffic rules to ensure sanity on the roads.