FRSC official slumps at passing out 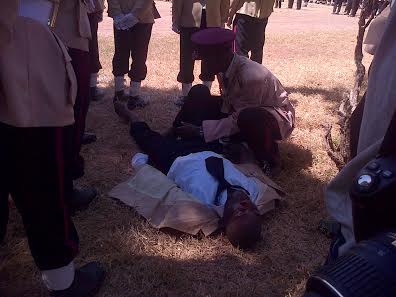 There was Unease in Niger State as a Federal Road Safety Corps officer on Thursday slumped at the passing out parade of trainees at the Police Training School in Minna.
Our Correspondent gathered that the officer, who was a member of the corps Colour Party could not bear standing under the scorching sun for over 90 minutes after the ‘Matching in Review Order’.
One of the officers who noticed the uneasiness of the officer quickly beaconed on other officers but before they got to him, he slumped.
He was quickly replaced by another officer who immediately carried the Nigerian flag.
The officer was first rushed to under a shady mango tree, where other senior officers tried to resuscitate him.
When it appeared things were getting out of hand, he was quickly rushed out with a stationed ambulance belonging to the State Government to an undisclosed private hospital in Minna.
Unconfirmed report have it that doctors were still battling to revive him as at press time as various life saving gadgets were fixed on him.
As at the time of filing this report, all attempt to get official confirmation from the FRSC about the present state of the officer proved abortive as the spokesperson was said to be on leave and nobody could speak on his behalf.
Earlier, the State Commandant of the FRSC, Sunday Maku, said out of the 543 candidates that reported for the over five months training, only 440 actually passed in the state.
According to Maku: “Out of the figure, five were redeployed to FRSC Marshal Inspectors’ Training School, Enugu State, while a total of eight were withdrawn during the course for various acts of indiscipline.
“During the period of their training, the trainees had courses on FRSC and Para-Military subjects, fitness and out door training exercises.”