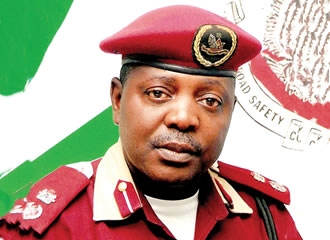 The Federal Road Safety Commission has deployed 34,000 operatives and 484 vehicles for Christmas and New Year special patrol.
This information was contained in a statement issued by Jonas Agwu, the Corps Public Education Officer, in Abuja on Tuesday.
According the statement, the exercise will begin on Thursday and last till January 12, 2014.
It stated that 53 Advance Life Support Ambulances and 17 tow trucks, consisting of eight heavy duty and nine light trucks, and 102 motorcycles had been deployed to support the personnel and vehicles.
Agwu said: “In addition, four helicopters for aerial surveillance have been deployed to consolidate the efforts to reduce road traffic accidents during the period.
“The exercise tagged ‘Operation Zero Tolerance’ has become necessary due to the usual increased movement of people and goods across the nation’s roads.”
The commission said it had identified 23 road corridors and 65 routes nationwide for the special exercise.
They are: Sagamu-Ore-Benin, Lokoja-Benin-Auchi, Onitsha-Ihiala-Aba, Abuja-Keffi-Akwanga-Hawan Kibo-Jos, Minna-Birnin-Kebbi-Sokoto-Gusau-Funtua-Zaria and Kabba-Umuoke-Ekiti-Ido-Ilesha roads.
“The operational focus will be on traffic control/calming, clearing of obstructions, checking speed limit and overloading violation, dangerous driving, use of phone while driving, light signal violation and other road vices,” the statement said.
The statement added that 20 critical traffic control camps had been set up to ensure seamless response to road crashes and traffic gridlocks.
It stated that the patrol would be conducted in collaboration with other agencies such as the military, the police, the National Emergency Management Agency, the Federal Roads Maintenance Agency and the Nigerian Security and Civil Defence Corps.
The FRSC urged motorists to comply with all traffic rules and regulations, adding that Mobile Courts would be set up at strategic points on the highways for prompt trial of traffic offenders.