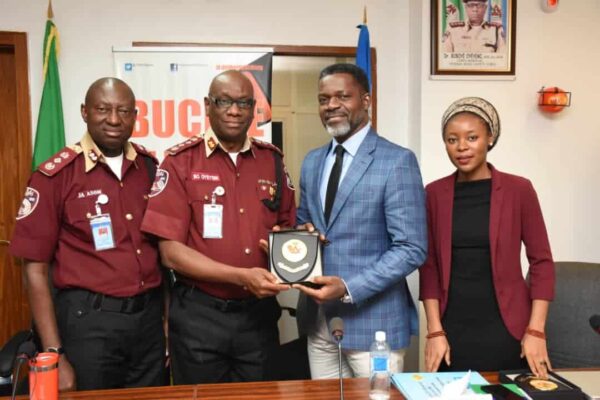 The Federal Roads Safety Corp and the Akin Fadeyi Foundation, conveners of the Corruption Not In My Country project, a micro level anti-corruption TV drama, have announced a major strategic partnership.
The partnership, which was consummated at the FRSC Headquarters on August 19, 2019, will be driven by technology, using the ReportCorruption App developed by the AFF and funded by the MacAuthur Foundation.
Tagged: “FLAG’IT,” the App shall serve as a tool to strengthen FRSC’s capacity to be integrity-driven, improve on public service delivery and be very responsive to public feedback.
It shall also be a platform where citizens can provide positive feedback on credible and outstanding officers.
Speaking at the event, the FRSC Corp Marshall, Dr. Boboye Oyeyemi, said the Executive Order 001, which supports the ease of doing business in Nigeria, has created more room for the government to be accountable and transparent in service delivery.
Oyeyemi said the FRSC has improved tremendously through innovative projects like the Joint surveillance activity, through which his commission partners with other agencies to improve governance in the country, enhance service delivery within the FRSC system such that Nigerians can now secure their driver’s licences just two months after having been certified by a regulated driving school; as well as a verification portal that helps track fake driver’s licences issued to unsuspecting members of the public.
Emphasising that no system was perfect, Oyeyemi enthused that the partnership with the Akin Fadeyi Foundation was timely, especially as it is bringing to the table technological innovation as mechanism for feedback, analytics and insight garnering for improved service delivery.
Responding, the Programme Officer of the Akin Fadeyi Foundation, Nabila Okino, commended the Corp Marshall for boldly confronting corrupt practices within the Corps.
Okino highlighted the AFF’s foundation’s objectives, programmes and interventions in Nigeria, including anti-corruption campaign, which is driven through the Not in My Country Edutainment and Never Again radio drama skits, which have been airing on CNN Africa and other TV channels under the funding of the John D and Catherine T. MacArthur Foundation.
Others, according to Okino, include training programmes in schools and, now, the incorporation of technology in the fight against corruption.
She thanked Oyeyemi and his team for their continuous efforts in ensuring safety on Nigerian roads.
Okino said due to the depth of endemic corruption in our society, it was impossible to achieve meaningful gains in the fight against the cancer without partnering with major stakeholders.
This, according to her, was what birthed the partnership between the FRSC and the Akin Fadeyi Foundation.
Also present at the event was the Deputy Director, MacAuthur Foundation, Dayo Olaide, who expressed his organization’s delight at the development and was full of commendation for the FRSC under Oyeyemi for opening up its processes to transparency and accountability.
Olaide said the MacArthur Foundation has taken into cognizance the impact of behavioural insights and learnings garnered from the edutainment skits produced by Akin Fadeyi Foundation and partnered with the Foundation because of the organization’s method of fighting corruption through the use of messages crafted for public enlightenment.
He stressed the importance of the FlagIT App in taming corruption as well as helping to improve public perception on the malaise.
Olaide recalled that way back in 2014, the President of the MacAuthur Foundation had decided to look at the Nigerian situation and seek new interventions through partnership with Non-Governmental Organizations and the Government.
Also, on invitation by the Office of the Vice President, MacAuthur rolled out programmes and initiatives that will help improve governance.
Olaide said: “When some people were called and asked to deliberate on what were Nigeria’s most pressing desires; of all the concepts that were deliberated upon, service delivery and accountability were most paramount.”
This birthed the On Nigeria project to improve the leg-work of reducing corruption.
Olaide, therefore, expressed confidence that this partnership was a step in the right direction as it reinforces MacAuthur’s commitment to working with credible non-profits to strengthen institutions and be more responsive to public yearning for a corrupt-free excellent service delivery and accountable governance.